When iOS 6 arrives on the iPhone 5, iPhone 4S, iPhone 4 and iPhone 3GS this year it will bring many amazing features, but one of the best new features is compatibility with the new national cell phone emergency alert system.

This system is part of the Safe Port act signed into law by George Bush, relying on Broadcast SMS to push notifications to smartphones for weather threats, Amber alerts and Presidential alerts. The system went live in New York City at the end of 2011, and should be live in most of the United States. 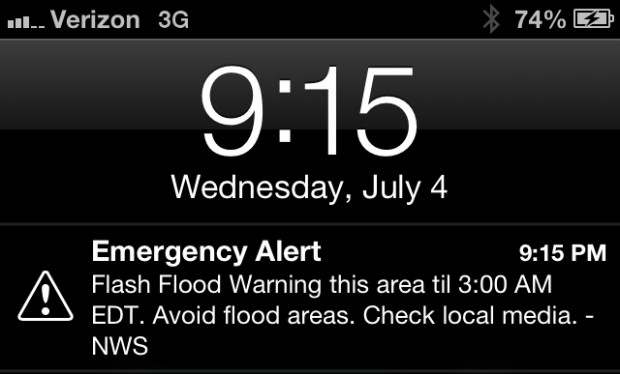 What Emergency Alerts look like on the iPhone with iOS 6.

Apple didn’t play up the feature in the announcement at WWDC 2012, but thanks to a bout of severe weather I discovered that iOS 6 turns on emergency alerts for the iPhone.

Why are Cell Phone Emergency Alerts So Important?

In my case, my smartphone is one of the only device left with a complete charge after five days without power. Thankfully I have a place to stay with power, but when another round of storms came through I was in a pitch black house and the only clue I had about the severity of the weather was the notification on my iPhone 4S running the iOS 6 beta. My wife’s iPhone 4S received broadcast alert, though a local news app provided an alert shortly after.

The alert is not tied to iOS or to smartphones, my father in law’s flip phone emitted a high-pitched squeal and showed a similar warning. Check out the flash flood alert shown below. 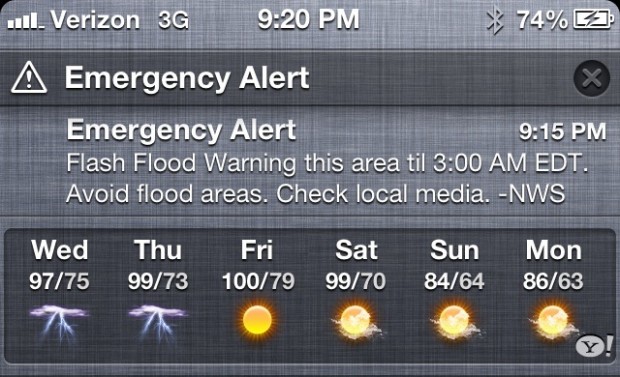 I did not hear any noise for the alert, likely because my phone was on silent. I’m hoping this type of alert can override the silent setting as I normally keep my phone in silent mode overnight.

The iOS 6 beta allows users to turn the settings on or off, and provides separate controls for emergency alerts and Amber alerts.

These emergency alerts are incredibly useful because they will be on by default for many smartphones, and rely on tower location to know who to alert. If a visitor was in my neighborhood on vacation their phone would also receive the notification, without the need to sign up for alerts.

Unfortunately the notification is not interactive. Tapping on the message will not direct the user to more information about the current emergency.