At WWDC 2012, Apple announced its next piece of mobile software, iOS 6. And while the final version of the software won’t arrive until the fall of this year, likely alongside the iPhone 5, the company has released the iOS 6 beta to developers. Users who have access to iOS 6 beta also have access to Apple’s new Maps application, an app that Apple clearly needs a lot of work.

Before today, we saw Apple’s iOS 6 mess up the names of oceans and tell users to drive off of freeway overpasses. Today though, the iPhone Maps is telling us to jump into the San Francisco Bay and take a nice, leisurely swim over to Saucalito.

Of course, what we were actually trying to do was to get directions from the Embarcadero to the Golden Gate Bridge but it appears that Apple’s Maps service thinks that using a car, public transportation or our own two feet aren’t the best way to get there. 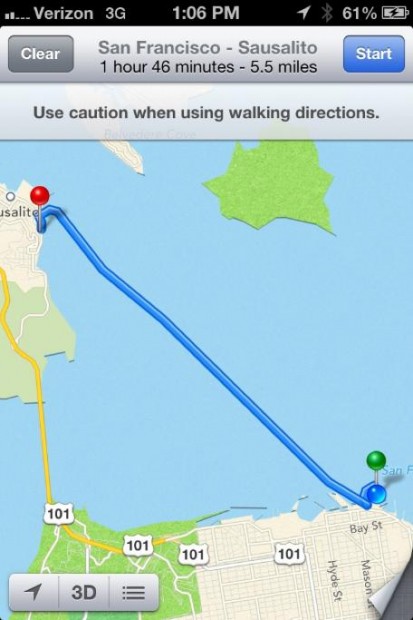 Clearly, this is not the way to the Golden Gate Bridge.

The Maps application isn’t the only feature that will be coming with iOS 6 when it arrives in the fall either. In fact, Apple has over 200 new features that will be coming along with the software for users of the iPhone, the iPad and the iPod touch. 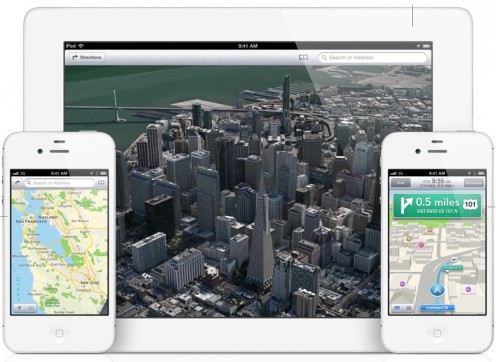 Chief among them are Facebook integration, Siri for the iPad, FaceTime over 3G and 4G, VIP Inbox and much more.

iOS 6 won’t be hitting devices until sometime this fall and it will likely be announced once again when Apple takes the stage and reveals the next iPhone, presumably called the iPhone 5.

Last year, Apple only unveiled pieces of iOS 5 at WWDC so there is reason to believe that the company will unveiled some iOS 6 features not found in the beta when it takes the stage in the fall.