The fake jailbreak teams claimed to be working on an iOS 6 jailbreak tools, claiming an untethered iPhone 4S jailbreak for iOS 6 would soon be available, and alluding to an iPhone 5 jailbreak on numerous occasions.

The first iOS 6 jailbreak scheme comes from Twitter user @JHerthop who claimed to be working on an iOS 6 jailbreak, but was also found to be looking for apps that allowed jailbreak like tweaks without being jailbroken. More recently, @JHerthop started asking followers for donations to start a website for his Claash jailbreak tool. The request for payments prompted users to ask for proof.

This is where the tale begins to unravel. After a variety of excuses, @JHerthop’s scheme comes apart when @MuscleNerd calls him out for using XCode to create a fake iOS 6 jailbreak video. After much attention, @JHerthop tweeted the following explanation for his actions.

I was paid to fake this to show people not to trust jailbreaks that aren’t from the devsI’m a nice person just teaching a lesson. Sorry!

MuscleNerd called out an extra 0 next to the Photos line, and signs of a Photoshop error around the6 on the version line. 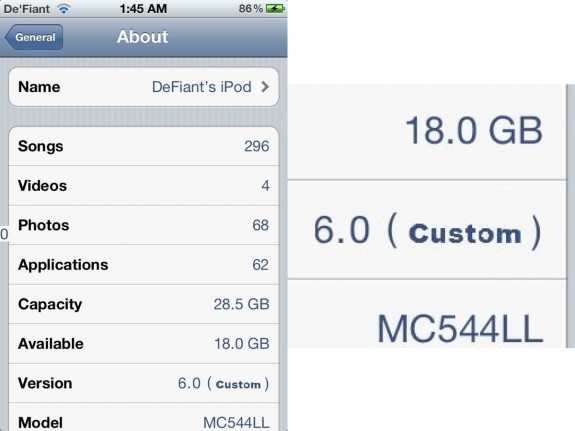 Clearly a doctored photo offered as proof of an iOS 6 jailbreak.

In this case, @Defiant6 claims his jailbreak is not a fake, but without further proof MuscleNerd’s allegation stands. 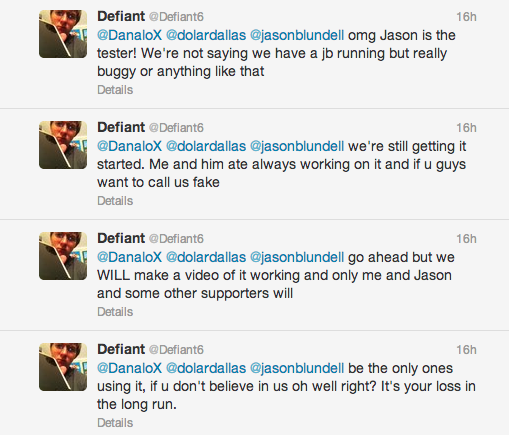 Cases like this are why claims of an iPhone 5 jailbreak, even one shown on the video below, are approached with skepticism. At this point, its a good idea to wait for an official iOS 6 jailbreak announcement from the Chronic Dev Team or the iPhone Dev Team.