Users hoping to jailbreak iOS 6 to add life and features to the iPhone on iOS 6 should hold off on pressing that update button.

The iOS 6 release date is Wednesday September 19th, but we don’t expect an iOS 6 jailbreak release date for some time.

The current iOS 6 GM, the last beta before release, is already jailbroken for developers on the iPhone 4, iPhone 3GS and the iPod Touch, but it is far from complete.

There is also no status update on the iOS 6 iPhone 4S jailbreak, so users of the iPhone 4 may be in for an even longer wait. 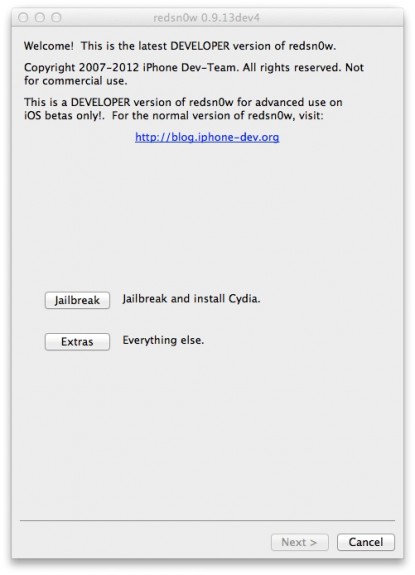 The redsn0w 0.9.13dev4 iOS 6 jailbreak tool will jailbreak iOS 6 on a handful of devices, but according to the release notes, not everything is working. This tool is still an, “an openssh-style developer-only release,” for the time being. This is a tethered iOS 6 jailbreak.

In addition to being more difficult than the typical jailbreak process, there is no Cydia yet. In the last update to the iPhone Dev Team blog, the team notes issues with Cydia and “fundamental modules like PreferenceLoader.”

Users who are tempted to try this anyway should make sure they know what they are doing. Unless you are familiar with “SSH or afc2” it is recommended you stay away from this iOS 6 jailbreak.

There is no update to the general public on the timing or possibility of an iPhone 4S iOS 6 jailbreak release, but it’s a safe bet to say that someone is working on it. We’ll be paying attention to pod2g and p0sixninja in hopes of some confirmation on the progress of an iOS 6 jailbreak for the iPhone 4S and new iPad.

Until the official iOS 6 jailbreak is released, users that rely on jailbreak apps should stick with iOS 5.1.1.