The jailbreak community is already benefiting from @pod2g’s return to jailbreaking. Pod2g and Planetbeing connected last week to work on the iOS 6 jailbreak and reportedly made, “nice progress.”

Planetbeing and pod2g discovered 2 new vulnerabilities needed to release the jailbreak, but are missing a key part of the iOS 6 jailbreak, which prevents a public release.

Made some nice progress today with @pod2g. I think I’ll try to reward myself with a nap. :)

. @planetbeing oh yeah! 2 new vulnerabilities in a day, chance was with us. But we still miss that initial code execution for a public jb :/

The team combines two of the most prominent iOS 6 jailbreak figures, both of which have spoken publicly about the iOS 6 jailbreak progress on numerous occasions in early 2013.

Planetbeing reported in early January that he is in possession of an untethered iOS 6 Jailbreak for the iPhone 5. This jailbreak reportedly works on the iPhone 5 with iOS 6.0.2. The jailbreak is not ready for a public release, as the team does not want to give up an exploit that allows the group to discover jailbreak vulnerabilities. 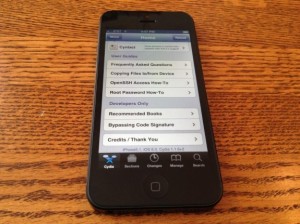 Proof of an iPhone 5 jailbreak.

The iOS 6 jailbreak that pod2g and Planetbeing are working on will likely work on modern iOS devices, based on progress we’ve seen over the last several months. We expect support for the following devices.

We’ve heard less about the specifics of an iOS 6 jailbreak for the iPad, but based on past releases it is likely that this jailbreak will cover the current iOS 6 devices.

The iPhone 4, iPhone 3GS and older iPod touch devices are already jailbroken with Cydia. It’s possible a new tool will allow these users to upgrade to an untethered jailbreak.

Check out the latest iOS 6 jailbreak news to find out everything we know about the progress towards a release.