The new Maps application coming in iOS 6 will be full of new features including turn-by-turn navigation, 3D maps and more. Today though, iPhone and iPad owners can chalk up to new features coming with the app including a new zoom feature and an important tool for travelers.

AppAdvice has discovered two new features that Apple has baked into the new Maps application, both of which are going to be extremely useful for iPhone, iPad and iPod touch users who make the upgrade to iOS 6 this fall.

The first feature is a zoom feature that allows drivers to see street names fade in and then fade out. While nice, it’s not the biggest feature found today.

Read: Apple Maps Relies on TomTom, Waze, NASA and More to Get You Home. 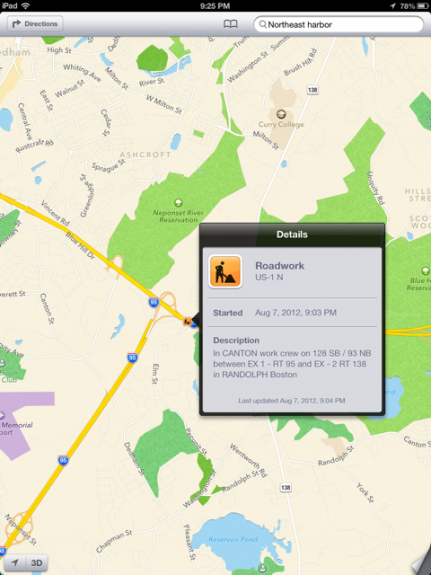 A new feature has been found in the iOS 6 maps application.

That distinction goes to a new hidden feature that displays a construction sign on the map whenever there is construction ahead. This nifty little feature will help drivers avoid nasty traffic buildups due to construction and find an alternative route around the roadblock.

The Roadwork sign will also, when selected, give pertinent information about the construction including a description of the work and the project’s starting date. 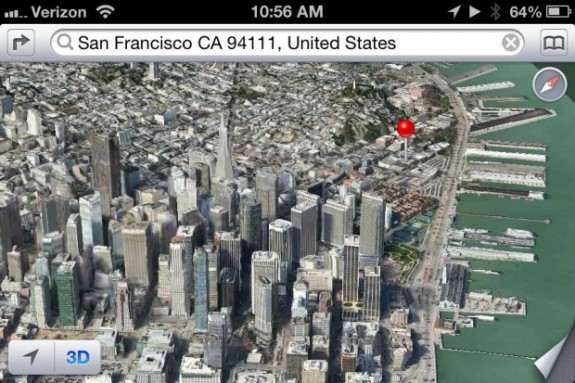 Apple Maps will be replacing Google Maps as the native maps application within iOS. The service and software were first shown off at WWDC 2012 though Apple remained mum on all of their features.

The map application, while native to Apple, will be launching with some help from partners like TomTom, Waze, NASA, Yelp Localeze and Acxiom and Urban Mapping.

Of note here is Waze which may be the service that powers these new construction alerts in Apple’s Maps application. Waze allows users to report traffic accidents, traffic jams and other issues that slow down the drive and actively routes you around the construction and slow downs.

Waze refused to comment about specifics only telling us that it had exciting things to come.

These new features are just the latest found within the new iOS 6 beta. Another feature that was recently discovered is one called “Wi-Fi Plus Cellular” which will toggle the iPhone or iPad back to cellular data when a Wi-Fi connection is experiencing issues.

The new features come addition to the 200 or so other new features that will be arriving with iOS 6 when Apple releases it for iDevice owners this fall.

Apple has not yet given iOS 6 an official release date, only saying that it will be out sometime this fall.