Apple is set to announce new iPhones today that will run the new iOS 7, but we’re still probably a week or so away from seeing iOS 7 launched to the public. With this unannounced date right around the corner, we thought it might be a little interesting to see where adoption rates are for iOS 6. Currently, according to Chitika, 92% of iPhones are running iOS 6, with 82% of iPads running the soon-to-be older version.

Of course, we’ll never see a full 100% of iPhone or iPad users running the latest iOS version, seeing as many consumers are still using older devices that have been discontinued and iOS updates are no longer available for them, but considering that, 92% is an extremely high number, certainly not a percentage that Android can match with a single one of their versions. 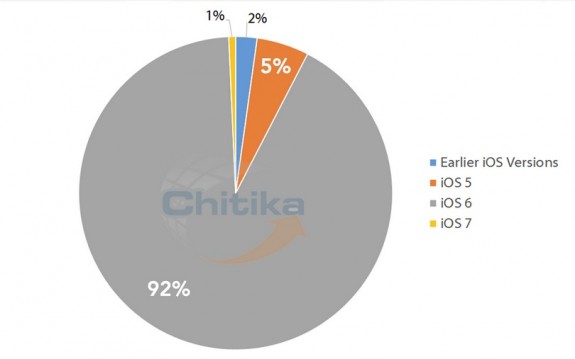 OS X 10.9 Mavericks is right around the corner as well, and Chitika is reporting that there’s a bit more fragmentation in the desktop and laptop OS space, with 34% of Mac users running OS X 10.8 Mountain Lion, 32% running 10.6 Snow Leopard, 23% running 10.7 Lion and 10% running 10.5 Leopard. 1.7% of Mac users are still using 10.4 Tiger, but these are obviously legacy Mac computers that can’t upgrade to the newer versions.

These stats from Chitika are in North America only and are calculated based on internet traffic. Chitika can see what devices are accessing the internet and websites using their advertising network, and can also see what iOS version that iPhones and iPads are running. It’s certainly not a hard number by any means, and it probably doesn’t match what the real percentage is, seeing as how Chitika doesn’t monitor every single device, but it’s still a pretty close calculation.

While we probably won’t see an official launch of iOS 7 today, we’ll most likely see it closer to the release date of the iPhone 5, which is set for September 20, according to our sources. Once it goes live, it’ll be interesting to see how fast adoption rates are, especially considering that this is the first major redesign of iOS since its original debut in 2007.