The iOS 7.0.1 update is now available for users who buy the new iPhones this morning, and it is likely that it will soon come pre-installed on the iPhone 5s and iPhone 5c.

At this time the iOS 7.0.1 update is not available for the iPhone 5 or other iOS 7 devices. The update contains bug fixes for Apple’s latest software, though the release notes that showed up on installation did not specify what any changes are.

iPhone 5s and iPhone 5c owners can check for a software update after setting up their iPhone, using the Settings -> General -> Check for Updates to start the process. The iOS 7.0.1 download could take some time as Apple’s servers are still under pressure from iOS 7 updates and possibly from iPhone 5s and iPhone 5c activations.

Users may want to wait a day or two to install iOS 7.0.1 on their new iPhone, for faster downloads and a better update experience.

Earlier this week an iOS 7 security flaw appeared online showing a way for users to bypass the pass code on the iPhone and the Touch ID fingerprint sensor on the iPhone 5s.

Apple is also reportedly working on an iOS 7.0.2 already which will bring unspecified bug fixes. This could arrive on the other iOS 7 compatible devices like the iPhone 4, iPhone 4s, iPhone 5, iPads and iPod touch.

Read: How to Get Better iOS 7 Battery Life 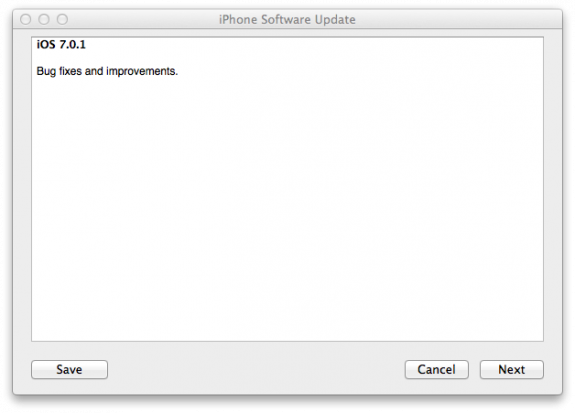 In addition to these minor updates, there is evidence that Apple is testing an IOS 7.1 update with employees, which could bring a collection of new features to the iPhone and iPad. One of these could be the iCloud Keychain which Apple pulled from the iOS 7 release after promoting it during the iOS 7 beta period.

The iOS X.1 releases normally arrive months after the first public version of a new iOS, in February or March, but rumors suggest it could come sooner.