Apple delivered a new enhancement to the burst mode feature that is exclusive to the iPhone 5s. Users on iOS 7.0.2 and iOS 7.0.3 can pick their favorite photos and easily delete the rest.

Update: The original article stated this feature arrived in the iOS 7.0.3 update, but it is part of the iOS 7.0.2 update.

In earlier versions of iOS 7 users could select favorites, but there was not an easy way to delete the other photos that didn’t turn out as planned. With the ability to take 100 photos in 10 seconds, this can quickly fill up a camera roll and the internal storage on the iPhone 5s, especially for 16GB owners.

In iOS 7.0.2 and higher users can now pick their favorites and when closing choose to keep just the favorites or all the burst mode photos. 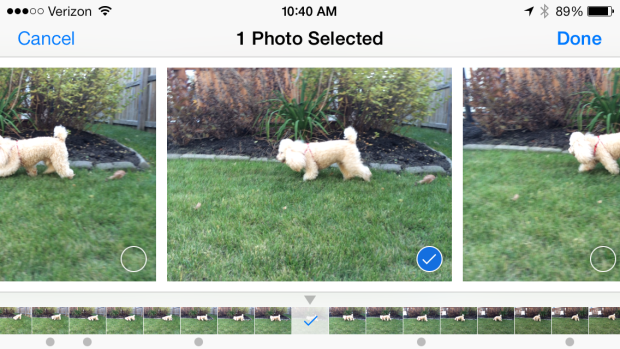 To take a burst mode photo set, hold down on the shutter on the screen or the volume down button. This will take a lot of photos very fast, and is perfect for capturing the split second a smile appears on a kid, a puppy makes a goofy face or a sports scene turns from mundane to masterful.

After you take a series of photos with burst mode on iOS 7 go to your Camera Roll and tap on the collection of photos. While looking in camera roll a small stack of photos will show in place of a single photo to identify burst photos grouped together. After tapping on the group of burst photos, tap on Select Favorites. 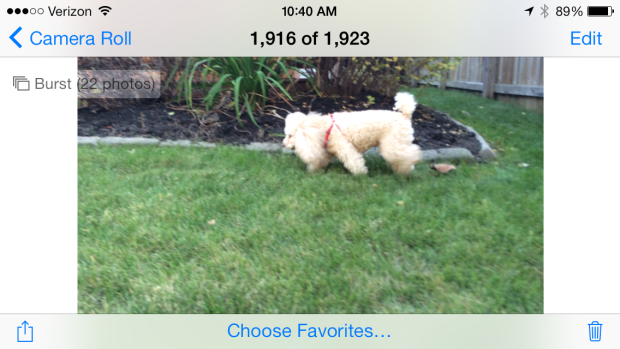 Scroll through the photos shown on the screen and select your favorites. A small circle will highlight which photos the iPhone and iOS 7 thinks are the best, but this is not always the photo or photos worth saving. Once you’ve selected all the favorites you want tap done in the upper right.

Here is where it will ask if you want to keep your favorites or all of the photos. Many times deleting the other photos is a better option, as it will save room, but if you want to go back and change your favorites, don’t delete them. If you choose to keep only favorites they will appear in your camera roll in place of the burst series. 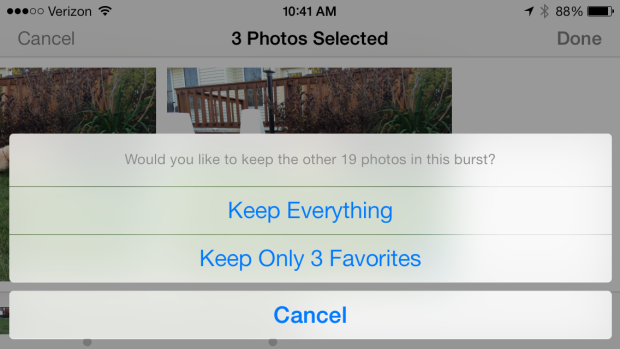 In addition to this new feature in iOS 7.0.2, Apple rolled out many fixes with the iOS 7.0.3 update that arrived last week. Along with the fixes there are many reports of iOS 7.0.3 problems.