Shortly after Apple’s event wrapped up today, the company released a minor update to iOS 7, dubbed iOS 7.0.3, that comes with several performance improvements and bug fixes — under 100MB worth of changes in this one. You might be eager to download the update in order to get the latest improvements on your iOS 7 device, but if you plan on jailbreaking in the future, it’s advised that you stay away for now.

Jailbreak developer MuscleNerd has tweeted out warning future jailbreakers to avoid downloading and installing the iOS 7.0.3 update for now, as he and other jailbreak developers have not yet had time to look over the update to see if it closes any exploits that the devs might have been planning to get around.

UPDATE: MuscleNerd has tweeted again saying that iOS 7.0.3 is safe to update to, as it doesn’t seem to affect any future jailbreak. 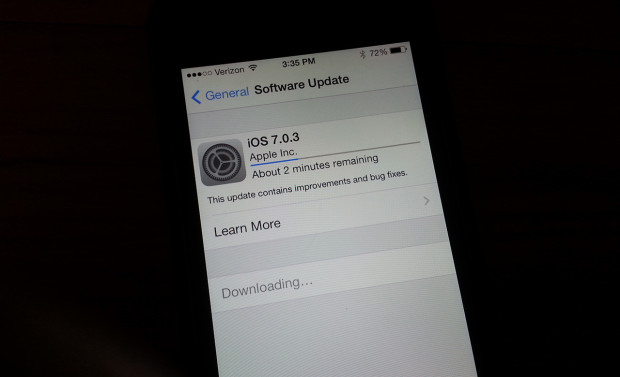 Previous iOS 7 updates, including iOS 7.0.1 and iOS 7.0.2 have been cleared by MuscleNerd and other jailbreak devs as a safe downloading, saying that it doesn’t break anything as far exploiting iOS 7 goes. However, iOS 7.0.3 may be different. Unlike the first two updates, this one includes a wealth of performance improvements and bug fixes that need a further look-over from jailbreak devs to see if there’s a closed-up exploit hole hidden in the changelog.

From what we’re seeing, nothing in the changelog appears to have anything to do with fixing jailbreak exploits. It’s mostly bug fixes to iMessage, Safari and further fixes to lock screen passcode bugs that allowed users to bypass the passcode in order to access certain features of an iPhone without the owner’s permission.

Nonetheless, we’d recommend taking MuscleNerd’s advice and waiting to update if you’re planning on jailbreaking iOS 7 in the future when it eventually comes out.