Apple has rolled out its latest iOS 7 update in the form of iOS 7.0.4, a bug fix update that will replace iOS 7.0.3 as the most current operating system for users of the iPhone, iPad and iPod touch.

For weeks, we’ve seen the iOS 7.0.4 update appear in server logs, however, we hadn’t seen anything confirmed for iPhone, iPad and iPod touch users. Apple is notoriously secretive about its incremental updates and typically does not offer any official information. With iOS 7.1 also appearing in logs, we didn’t know which update would roll out to replace iOS 7.0.3. Today, we have our answer.

After several weeks on iOS 7.0.3, iPhone, iPad and iPod touch owners on iOS 7 can now upgrade their device to iOS 7.0.4, a small bug fix update that checks in around 17MB in size and should only take a few minutes to download and install. The update features bug fixes and improvements and Apple calls out an issue with FaceTime calls specifically. 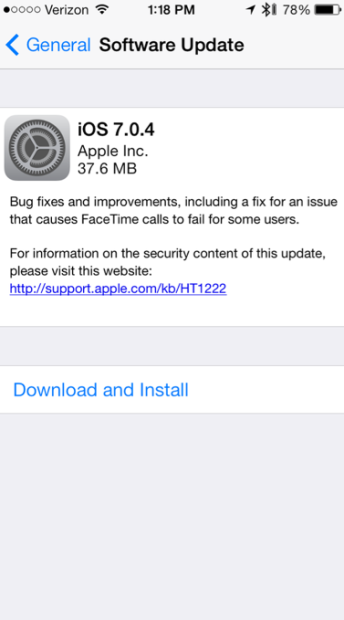 The update is now available Over-the-Air through iOS 7’s Settings and those who can’t or simply wish to bypass the OTA method can install the software through iTunes.

For weeks, users have been complaining about issues inside of iOS 7.0.3. Those issues have ranged from minor issues like text disappearing to major issues like random reboots. It’s unclear if this update is going to tackle all of the issues that we’ve heard about in recent weeks, there is a laundry list of them, but we imagine that it will help more than it will hurt.

iOS updates also have the chance to introduce new bugs to iPhone, iPad and iPod touch owners and users will be hopeful that iOS 7.0.4 is relatively bug free. Those who are skeptical will want to hold off on the upgrade for the time being.

With iOS 7.0.4 now out, we imagine that the next update could be iOS 7.1, an update that figures to deliver bug fixes in addition to new features. Apple typically packs in a new feature or two to its iOS x.1 upgrades, though, we haven’t heard anything specific just yet.