Apple is pushing an iOS 7.0.6 update out to the iPhone, iPad and iPod touch with bug fixes today, just a month after the iOS 7.0.5 update arrived for some users and well ahead of a rumored iOS 7.1 release.

The iOS 7.0.6 update is available as an over the air update for the iPhone 5s through iPhone 4 and will also run on the iPad Air through iPad 2 as well as both iPad mini models and the iPod touch 5th generation. 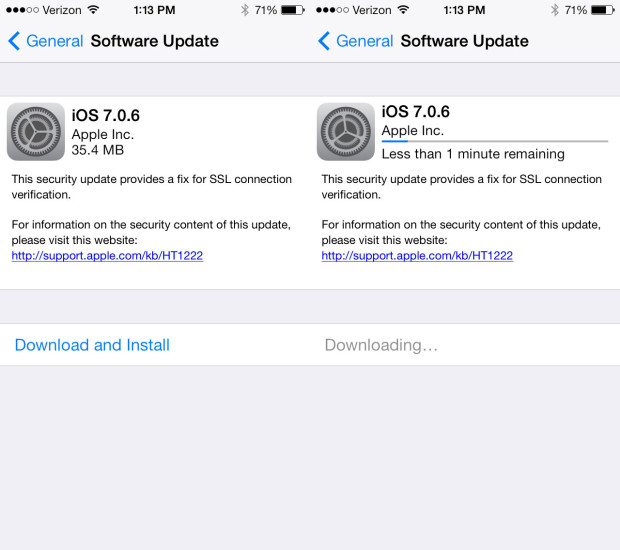 The iOS 7.0.6 update arrives for iPhone, iPad and iPod touch, but doesn’t fix the growing list of iOS 7 problems users are most vocal about.

According to Apple the iOS 7.0.6 update is a security update. Apple states that this fixes,

This security update provides a fix for SSL connection verification.

While security is important, many iPhone and iPad users likely wish this was the update that fixes a growing number of iOS 7 problems. Users complain about crashes that reboot the iPhone multiple times during the day and older iPhone owners complain a about an iOS 7 problem that makes entering text into forms very difficult while using multitasking.

Users can download the iOS 7.0.6 update by going to Settings -> General -> Software Update or plugging in to a computer which should see the update for the device. This is a small update that should not take long to download or install, but users will not be able to use the iPhone or iPad while the installation completes. It is a good idea to be backed up before installing any iOS updates.

Apple is also working on an iOS 7.1 update that should arrive in March. This is a large update that will likely fix many iOS 7 problems. Apple already confirmed an update will fix the reboot issue, and we expect that it is part of the iOS 7.1 update. The iOS 7.1 update is not expected to add any dramatically new features, but it will bring some visual changes to update parts of iOS to a full iOS 7 look.