iPhone and iPad users reading through Facebook might stumble upon a post claiming that an iOS 7.1 jailbreak release is here, and that they can perform the jailbreak right from the iPhone or iPad.

We also see similar stories appear in Google News as part of blogs attached to local newspapers, where an author claims this iOS 7.1 jailbreak is easily available and successful.

This is not the first fake jailbreak to appear on the market, but it is the first iOS 7.1 jailbreak claim we’ve seen in the week after Apple released the new software update to users. 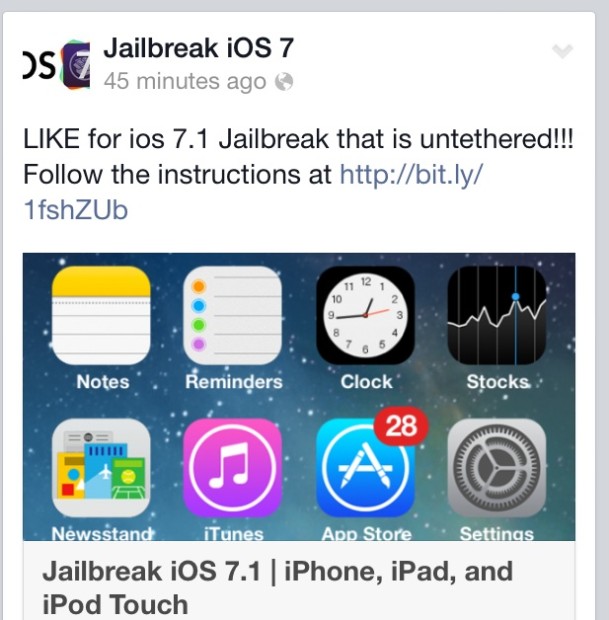 This announcement of an iOS 7.1 jailbreak release is not legit.

According to 7jailbreak.com, they are offering a iOS 7.1 remote jailbreak that works on the iPhone 5s through iPhone 3GS, the current iPad lineup, multiple iPod touch models and works on iOS 7.1 through iOS 7.0. The service claims it is possible to click on a link and jailbreak the iPhone on iOS 7.1 without the need to plug-in to a computer.

The working iOS 7 jailbreak requires users download a tool on a computer and connect with a cable to perform a jailbreak, but this website claims to offer something that the jailbreaking community has not experienced since the early days of jailbreaking, a jailbreak possible only on the phone. 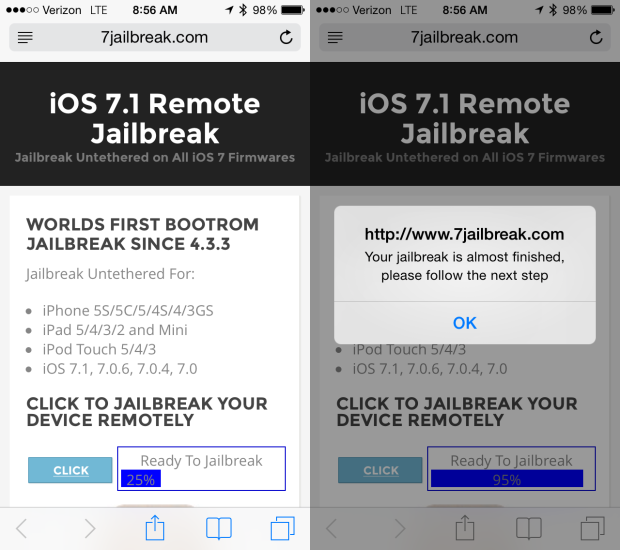 This iOS 7.1 jailbreak is not the real deal.

7jailbreak goes further using the name of Joshua Hill, a developer known as @p0sixninja, who played a role in earlier jailbreak efforts. The website quotes Hill as saying, “This will go down in iOS jailbreaking history!”, which appears to lend credibility to the service. in 2013 Hill told Gotta Be Mobile that he is not a part of this site, calling 7jailbreak.com’s claims, “all lies.”

Users that try to click-through and use the remote iOS 7.1 jailbreak will see a popup and be directed to a page to download an app before they can complete the jailbreak process. This will push the user to the app store to download an app through an affiliate link which makes money for the 7jailbreak owner. This is not a normal jailbreak operation, and is another red flag. 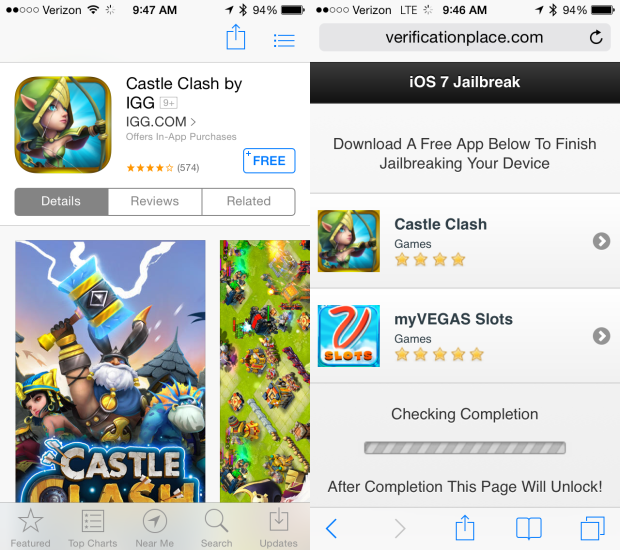 The 7jailbreak service offers app downloads, instead of an iOS 7.1 jailbreak download.

As for the actual iOS 7.1 jailbreak, the future is uncertain. After Apple released the iOS 7.1 update earlier this week Pod2g, a member of the Evad3rs team, announced that they are not working actively on an iOS 7.1 jailbreak. Instead the team is likely to focus on an iOS 8 jailbreak when a new version comes later this year, though he might work on an iOS 7.1 jailbreak tool if he gets bored enough, according to the interview with International Digital Times.

Users that want to jailbreak should avoid the iOS 7.1 update as it will remove a jailbreak without an ability to go back. There is no way to switch from iOS 7.1 to iOS 7. If you need to restore, there are ways to restore without losing a jailbreak.