This One Chart Shows Why the iOS 7.1 Release Can’t Come Fast Enough

The iOS 7.1 release date is rumored for March, but Apple faces a mounting problem with iOS crashes that consumers want fixed today, not in two months.

The chart below shows why Apple needs to deliver the iOS 7.1 update and fix iOS crashes as fast as possible. In the last year, searches for iOS Crash caught up to those for Android Crash, a marked increase. Developer Steven Troughton-Smith shared a version showing the iOS crashes earlier, but when you plot Android crashes next to this data a bigger picture emerges.

During the last year searches for iOS crash nearly caught up to those for Android crash.

That two most recent spikes in iOS crash searches come from the iOS 7 release in September and resume with the iOS 7.0.4 release in December.

Couple this with Amazon, Microsoft and Samsung beating Apple on the customer experience and frustrated users voicing their opinions on social media and it is clear that Apple has a problem.

Bloody Great – my iphone decided to crash and has switched off – not a happy cookie :-(

Alright Mr. iPhone 5s. I’ve had all I can stand and I can’t stands no more. I hereby grant the HTC One temporary Harlem status.

Apple promised a fix for the iOS 7 crashes in a statement delivered Wednesday, but failed to name the update. Apple spokeswoman Trudy Miller shared the following statement with Mashable, “We have a fix in an upcoming software update for a bug that can occasionally cause a home screen crash.” 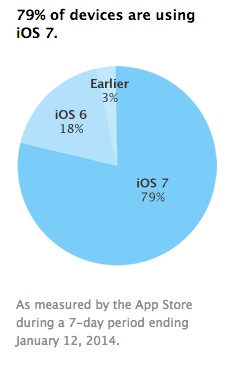 While Apple could issue a fix with an iOS 7.0.5 update for the iPhone the existing iOS 7.1 beta already appears to fix this problem for developers who are using the pre-release software. The iOS 7.1 release date is still un-announced as Apple will likely offer several more beta releases to developers before sharing the iOS 7.1 release with the general public.

Apple announced iOS 7 in June 2013 and officially released it in September 2013, two days before the iPhone 5s release. Critics blasted the new look of iOS 7 during the summer of 2013 but the average user did not appear to care that much with nearly 80% of iPhone, iPad and iPod users on iOS 7 as of January 12th.

That’s a 5% jump from December which is possibly tied to the iOS 7 jailbreak and increased compatibility of iOS 7 Cydia tweaks and apps for the iPhone and iPad. Apple closed one of the holes that the iOS 7 jailbreak uses with the iOS 7.1 beta 4, which could renew the arms race between Apple security and iOS jailbreak teams.

While many users are complaining about the iOS crash issues, others also hope that Apple will deliver better iPhone battery life with iOS 7.1 and speed enhancements for older devices like the iPad 3 which is sluggish on iOS 7.