The iOS 7.1 release for iPhone and iPad users has moved even closer today with the release of the fifth iOS 7.1 beta. The update is now available to those in the developer program and it means that Apple is now one step closer to the release of the public version for iPhone, iPad and iPod touch users around the world.

In November, Apple released the first iOS 7.1 beta. In late December, we heard that the iOS 7.1 release date might be coming in March, or several months after the initial release. And while many found that hard to believe at first, it’s looking more and more like it could, perhaps, be the iOS 7.1 release month. 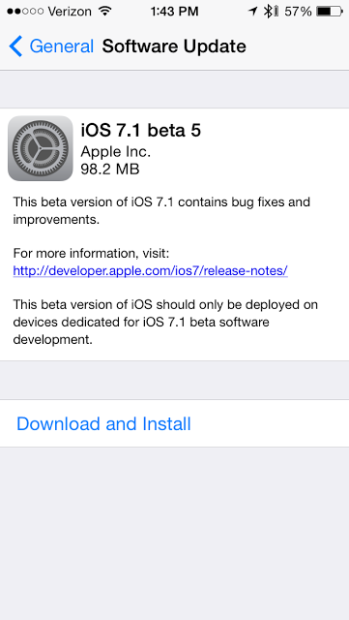 The dust is still settling but it appears that this update also enhances Siri for international users. It looks like Apple is continuing to improve on the voices for Siri in markets like Australia, the United Kingdom, and Japan.

We imagine that developers poking around the new beta will soon discover more changes that Apple has made to the software but it will take time. Often, some of the changes are incremental and hard to catch.

What we do know is that this means that the iOS 7.1 release date for the public is inching closer. If a BGR report is accurate, it could be that iPhone, iPad and iPod touch users are just one, or perhaps two, iOS 7.1 betas away from the Gold Master version of iOS 7.1. Once the iOS 7.1 GM is released to developers, a public release should follow soon after.

The iOS 7.1 is shaping up to be the largest iOS update since the arrival of iOS 7 back in September. iOS 7.1 betas have shed light on at least some of Apple’s plans for the update including the addition of the long awaited iOS in the Car feature that was detailed back at WWDC last June.

Apple’s brand new iOS 7.1 update is also expected to include user interface changes including major changes to the Power Off screen, performance enhancements and bug fixes that should tackle the springboard issue that iPhone and iPad users have encountered since the release of iOS 7 last year.

The company never announces incremental update release dates ahead of time which means that users will more than likely be in the dark in the buildup to the iOS 7.1 release.