This is the second iOS 7 beta, which will likely be followed with many more as Apple looks to tweak the performance of iOS 7 and add-on additional iOS 7 features.

One new feature is the return of the Voice Memos App, which was not present in the first iOS 7 beta.

The iOS 7 beta 2 downloads will also soon appear on IMZDL for users looking to pay $8 to join the iOS 7 beta.

Read: How to Get iOS 7 Beta Now 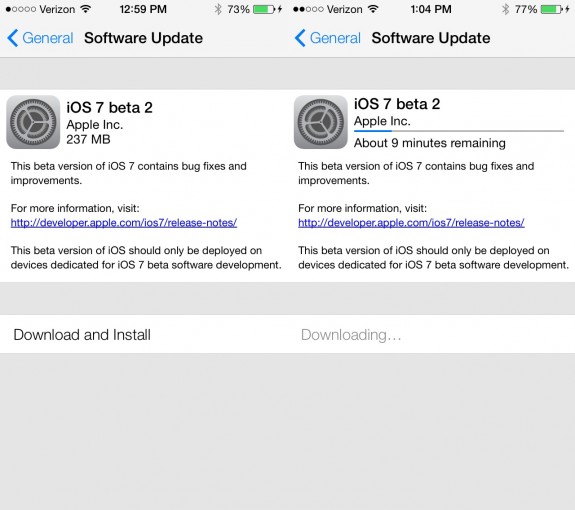 The iOS 7 beta 2 download is available now with un-announced features and fixes.

iOS 7 beta 2 for the iPhone 5, iPhone 4S, iPhone 4 and iPod touch 5th generation is available as an over the air update. This allows users to download the update directly to their iPhone.

Tap on Settings -> General -> Software Update – Download and Install to upgrade to the iOS 7 beta.

It is highly recommended that users running the iOS 7 beta upgrade to the beta 2 as soon as possible. Unlike traditional iOS software, The iOS 7 beta features an expiration date, which when passed will render an iPhone useless if it is on the expired version. Users can plug into a computer to update after this happens, but it is simpler to update the iPhone to IOS 7 beta 2 right now.

The iOS 7 beta video below walks through many of the top IOS 7 features.

Apple only offers the iOS 7 beta to registered developers, but third-party services re-sell access for as little as $8 to users that want to try the iOS 7 beta before the official fall IOS 7 release date. The iOS 7 beta may not work with all apps and could deliver a less stable experience so users without a backup phone should wait for the official iOS 7 release.

Users who spot any new IOS 7 features can tip GottaBeMobile and can reach out to the author on Twitter at Josh_Smith to share their news.