The iOS 7 beta 5 release landed today just a week after Apple recovered from a Developer Center outage and released the iOS 7 beta 4.

Previous rumors suggested Apple was aiming for an iOS 7 beta 5 release on August 12th, but it looks like Apple is making up for lost time with a new version of the iOS 7 beta it wants to get into final release form for the fall.

The iOS 7 beta 5 release appears as an over the air update for existing iOS 7 beta users and developers can download the files in the Apple Developer Center. 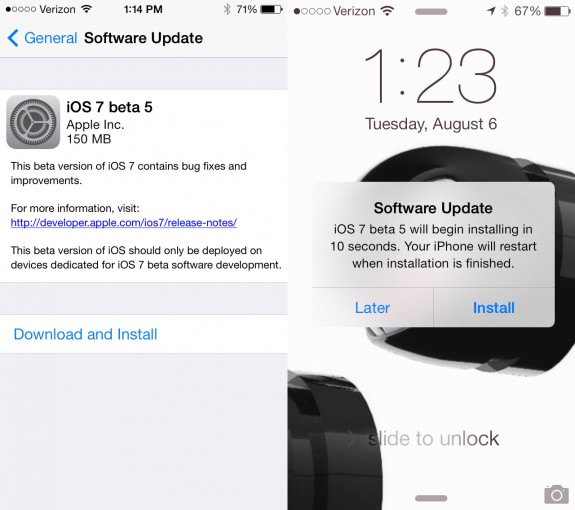 The iOS 7 beta 5 release surprises, arriving on a Tuesday with new enhancements.

In iOS 7 beta 4 Apple delivered a host of improvements to the iOS 7 user interface including a new lock screen and various changes throughout the OS. Apple is making major changes to the look of iOS with this release, so it is not surprising that the look is changing with each beta.

The IOS 7 beta performance improved dramatically last week, and it’s possible Apple is now to the stage where it can start enhancing and adding in extra features and final touches into the iOS 7 beta 5 and iOS 7 beta 6 releases.

The last iOS 7 beta delivered several hints of iPhone 5S features including a fingerprint reader and a Samsung made Apple A7 processor  for the iPhone 5S, so it’s possible the iOS 7 beta 5 release will bring about other new features destined for iOS 7 and the iPhone 5S.

Apple posted a full iOS 7 beta 5 change log on the Apple Developer Center which offers details for developers about what’s new in iOS 7 beta 5, but as expected the list caters to the many developers preparing iOS 7 apps, rather than revealing a lot of new iOS 7 features. 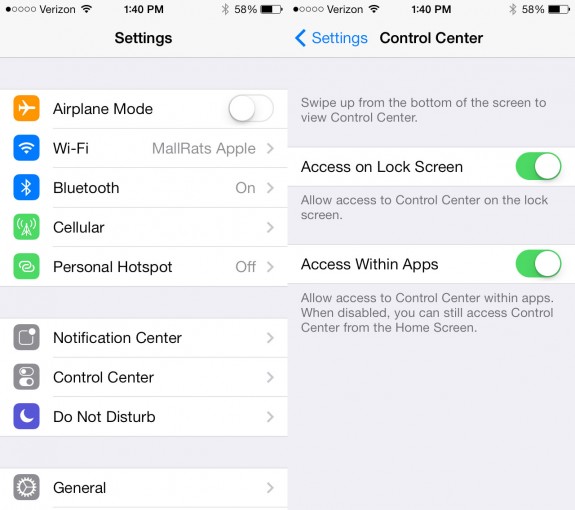 iOS 7 beta 5 includes a new settings page with colored icons for the settings and more control over Control Center, including the ability to turn it off while in apps. This could help prevent accidental touches in games.

The iOS 7 beta 5 release also includes a new pull down option for notifications. The image below shows a Tweetbot notification that a user can pull down. Pulling down will take the user to the Notification Center, not to the app. Push up on the notification to dismiss it. This is a handy feature as the banners are bigger in iOS 7 and cover buttons in many apps.

There is also a new Twitter icon on the sharing screen and Yahoo makes a bigger appearance as the provider of data like weather and stocks. 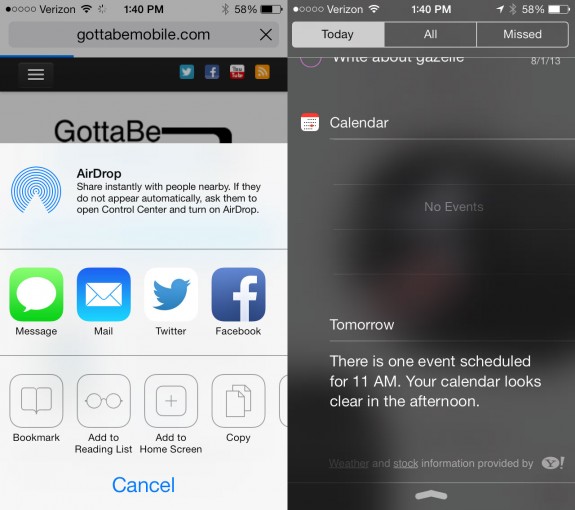 Apple is holding an iOS 7 release to the public for this fall, but users that want to try the iOS 7 beta early can do so for as low as $8. This is not recommended for everyone as some apps will not work on the iOS 7 beta, and the iPhone could crash. With the new iOS 7 beta 5 release we should see even better performance as Apple squashes the biggest bugs, so if you’ve been on the fence it may be a good time to try the iOS 7 beta. Just don’t be an iOS 7 beta tester behaving badly.