The iOS 7 beta 6 release arrived late today, a week a head of the rumored release date with a small fix for an iCloud issue but not much else to note.

This is the second iOS 7 beta download to arrive outside of the previous Monday schedule, and the first to do so late in the day, so it’s possible Apple saw fixing this issue as a priority it didn’t want to hold over for a bigger update.

Earlier today a rumor suggested the iOS 7 beta 6 release would come next week, ahead of a Gold Master or final iOS 7 beta on September 5th to Apple partners and September 10th to developers, the same day of the rumored iPhone 5S launch date. 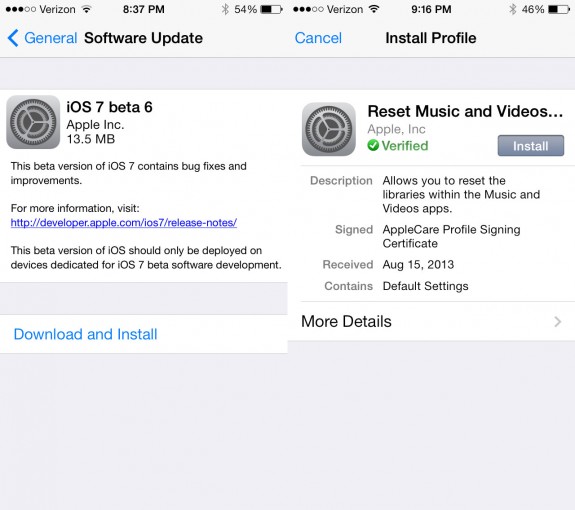 In addition to the iOS 7 beta 6 download files Apple offers in the Developer Center, there is an additional file users will need to download and install to reset their music library.

This ResetMusicAndVideosLibraries configuration profile resets the media library and will force users to all music and videos stored within the Music and Video apps. This will not remove videos from the camera roll, only content purchased in iTunes.

Registered iOS 7 developers can download the iOS 7 beta 6 ResetMusicAndVideosLibraries configuration profile by clicking opening the Developer Center in Safari on a device running iOS 7 beta 6. This will prompt users to install a verified profile, as shown in the image below. After installing it, Go to Settings -> Music -> Reset Media Library and then restart the device to complete the process. 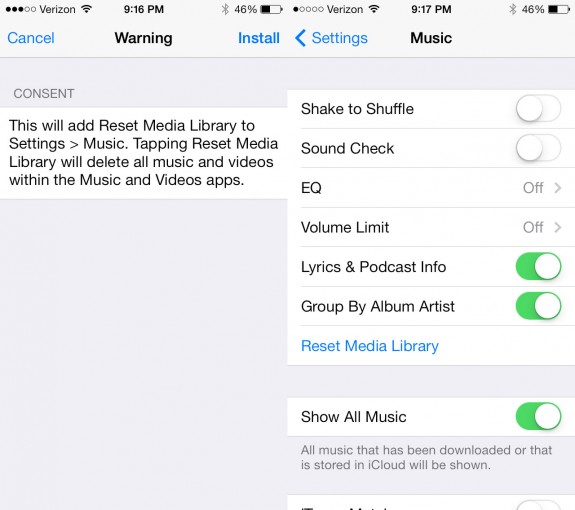 There are other iOS 7 beta 6 release changes in this update, including the removal of cellular fallback, which was in an earlier iOS 7 beta. This technology would automatically switch to a cellular connection if a WiFi Network was bad due to a cable modem or router issue.

A variety of other changes present in the iOS 7 beta 6 release notes share the details developers need to know to make iOS 7 compatible apps, but are likely of little interest to the general users that are simply beta testing IOS 7 ahead of the release.

Apple could issue an iOS 7 beta 7 release before an iOS 7 GM and ahead of the fall IOS 7 release to the public. Previous versions of iOS betas have gone up to beta 8, where 8 was the final beta. It is possible the iOS 7 release is set for September 18th for the general public.