The iOS 7 beta 4 release is still up in the air as Apple deals with the fallout from a hack that led to taking the developer center offline. As users wait for a new version of the iOS 7 beta, some users are taking to social media to complain about IOS 7 beta bugs they hope are fixed in the iOS 7 beta 4 update, and others are leaving bad reviews on apps because the apps don’t work on iOS 7.

The problem is bad enough on the app store that some developers are actually including notes that say, their app is not compatible with the iOS 7 beta.

While developers using the iOS 7 beta to prepare their apps for the iOS 7 release this fall are surely not talking about it on app reviews and on Twitter, users that paid $5 to $8 to register their device with a developer account without understanding the risks and responsibilities that come with beta testing aren’t bashful about complaining.

As users wait for the iOS 7 beta 4 release, users forget the rules of using the beta and are leaving bad app store reviews.

When we shared how to try the iOS 7 beta early we also warned users that some apps might not work and that there would be issues, going so far as to list 5 Reasons to Skip the iOS 7 beta, but the bad behavior from beta testers is still on full display.

iOS 7 beta testers are surely frustrated with a bug that prevents some incoming calls from ringing on the iPhone, apps that crash and general instability, but that’s what they signed up for.

With that in mind here are five examples of iOS 7 beta testers behaving badly.

iTunes user GoSpinBoy leaves a one star review on PokerStars because the app crashes on iOS 7 beta 3.

A bad app store review from an iOS 7 beta user.

FrankeProchazka shaves a star off the review of LivingSocial because the app isn’t working just right on the iOS 7 beta.

Using the volume buttons on Spotify in iOS 7 will cause a crash.

On the iOS 7 beta 3 volume buttons cause the Spotify app to crash, which is enough to earn a bad review. Spotify actually responded to this complaint on Twitter saying it is working on a fix.

Some iOS 7 beta users aren’t able to grasp that there will be apps that don’t work right. This user leaves a three star review for the app that is the only reason he still uses an iPhone. 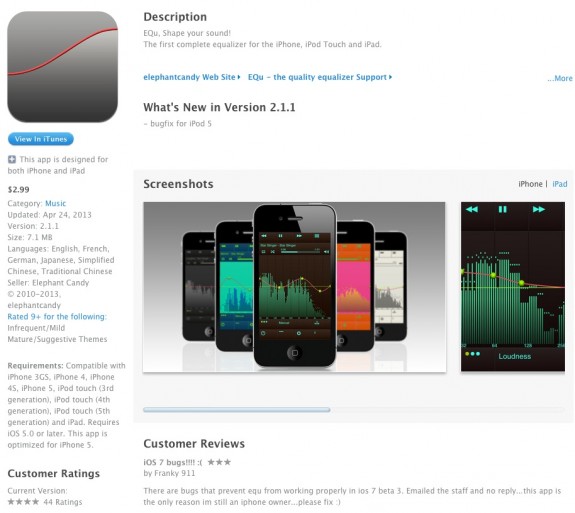 Yet another iOS 7 beta app review with stars shaved.

The iOS 7 beta 3 doesn’t deliver perfect performance, but it is a major overhaul of the way iOS looks and it is a beta, so it is to be expected. Here we see a user second guess his decision to use the iOS 7 beta. Thankfully there is an easy way to downgrade from the iOS 7 beta to iOS 6.

We also hear from a user that is dealing with a small graphical glitch on the iOS 7 beta.

Been using iOS 7 beta 3 for 40 minutes and this happens to me :( pic.twitter.com/SkbfogfIiW

When Apple is pushing out new iOS 7 features and changes to the performance of iOS 7 there are sure to be bugs, which is why it’s not a good idea to run the iOS 7 beta on a device that is used every day.

App developers are especially protective of app reviews and ratings as they influence user’s decisions to buy the app. Lower star ratings and bad reviews can impact the popularity and sales of an app. Criticism is good when apps deserve it, but when it’s about a beta software release not working right with their app, it’s