While the actual iOS 7 release date is probably months away, designers are already coming up with their own visions for Apple’s upcoming software with the latest iOS 7 concept video showcasing a new smarter lock screen for the iPhone that will likely be arriving with iOS 7 later this year, the iPhone 5S.

Rumors suggest that iOS 7 could be arriving alongside the new iPhone as soon as this summer. Apple’s iPhone 5S, which has been rumored to be replacing the iPhone 5 as the company’s flagship smartphone, has been extensively rumored to be coming out this summer, much sooner than last year’s fall release. No specific release date is known yet but a rumored launch date of June 29th is likely inaccurate.

Typically, Apple releases a new version of iOS alongside the new iPhone and we expect the company to do similar this year. However, unlike the iPhone 5S, the features of iOS 7 remains shrouded in darkness. We have heard that the software may have a killer feature on board to help the iPhone 5S better compete against the software stacked Samsung Galaxy S4 and the new HTC One, but as of yet, that feature is unknown.

Former iOS chief Scott Forstall is also now out of the company which has prompted rumors of a design overhaul courtesy of Jony Ive. And while a major design overhaul of iOS 7 may or may not occur, we could see some tweaks to existing features.

One of those features is the lock screen which has remained stagnant for quite some time. And one designer, Mohamed Kerroudj, has taken it upon himself to produce a nifty iOS 7 concept that imagines a smarter iPhone 5S lock screen.

Read: This is What Safari Should Look Like on iOS 7. 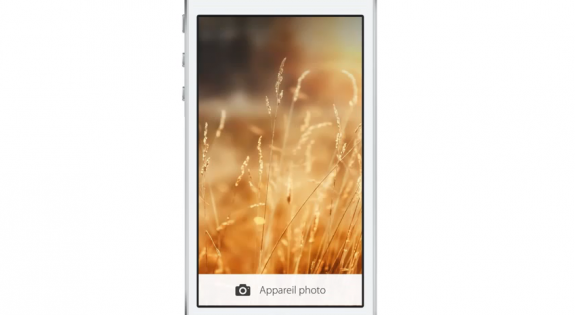 His concept is a simple yet elegant and useful new lock screen for the iPhone that displays important information at the bottom of the display rather than at the top like the current lock screen. There also seem to ways of adjusting Wi-Fi connectivity, location services and more. Swipes to the left and right reveal even more options including the option to snap a photo.

Overall, what we have is a smoother, cleaner lock screen that both iPhone 5S and current iPhone owners would appreciate. Whether or not we see actual changes to the lock screen from Apple remain to be seen.