This spectacular iOS 7 concept video shows one take on a Jonny Ive inspired iOS with a new look, new features and customizations cool enough to convince many users there is no need for a jailbreak.

In a set of iOS 7 concept photos and the iOS 7 concept video below, Agente Apple shows off a new look for iOS that adds in many popular Android features like widgets and an enhanced Notification Center and lock screen.

If this is what iOS 7 looks like, there will likely be many happy iPhone owners. While Apple typically tells users what the iOS experience is like, here we see a vision of iOS 7 that offers greater customization and flexibility for users.

Apple just announced that WWDC 2013 will take place on June 10th, and while the company did now make any announcements about iOS 7, Apple generally announced the new operating system at this developer event. If this is the case, we will likely see Apple’s vision of iOS 7 in just over a month and developers will get to try it out soon after.

The Agente Apple iOS 7 is, “based on the simple design of Jonathan Ive” according to the description. Jonathan Ive is in control of iOS and will reportedly deliver a new design free of skeuomorphism (apps that look like real objects). Reports indicate that iOS 7 will deliver a new, “significant system-wide UI overhaul.” according to John Gruber. 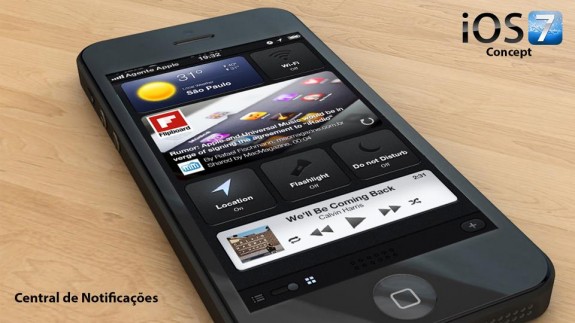 The iOS 7 concept features a new Notification Center with widgets and toggles.

The iOS 7 concept highlights a number of app redesigns, but the most interesting additions to iOS 7 in this concept are the customizations and the Notification Center. That’s not to dismiss the great looks and the nice slide gestures built-in to the first part of  the IOS 7 concept video, which are worth watching.

The Notification Center in this iOS 7 concept features grouped notifications and an easy way to clear all notifications — something iOS 7 desperately needs. With the notifications out of the way, users can access widgets to see news, change settings and more. This is almost a mix of an Android notification drawer and Android lock screen. While the number of options, scrolling and tapping are a bit busy, we would welcome this change. 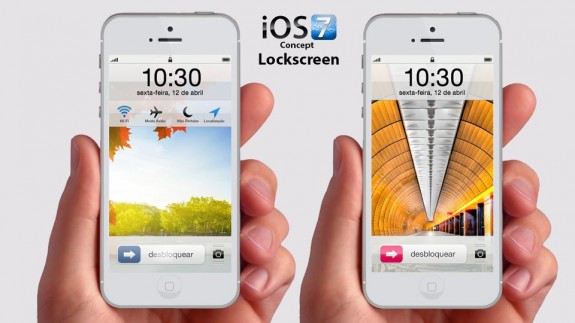 An iOS 7 concept with plenty of customization options

The other big part of this iOS 7 concept is customization. In the video we see how users could customize the lock screen to match the color of the white or black iPhone. Users would also be able to pick the transparency of the clock and other elements to see the wallpaper behind it and to pick a color for the slide to unlock button.

Users can also double tap on the clock in this vision of iOS 7 and access settings for WiFi, Airplane mode, Do Not Disturb and Location.

Rounding out the lockscreen is the ability to pick which app the slider next to the slide to unlock opens. In this demo users can slide up to open the phone, camera, messages or Safari.

As much as many users would love to see these added features and customization options in iOS 7, Apple is not likely to offer this much control of the looks to users.

If Apple announces iOS 7 at WWDC 2013 in June, we can expect iOS 7 betas to arrive shortly after for developers. The iOS 7 release date would likely fall much later, into the fall when Apple is expected to announce the iPhone 5S. Apple typically launches a new major iOS version days ahead of new iPhone hardware.