A new iOS 7 concept emerges as we inch closer to WWDC 2013, showing us an improved lock screen with widgets, controls and a new look.

Apple is widely expected to revamp iOS when the iOS 7 release comes out, which could mean a radically new look for various parts of the iPhone and iPad, but this concept focuses on a few key areas.

The lock screen is now a hub of information and access to apps and we see several new Apple apps redesigned for iOS 7. This matches up with recent rumors that Apple will revamp core apps to better fit Jony Ive’s vision for the software running on his hardware. 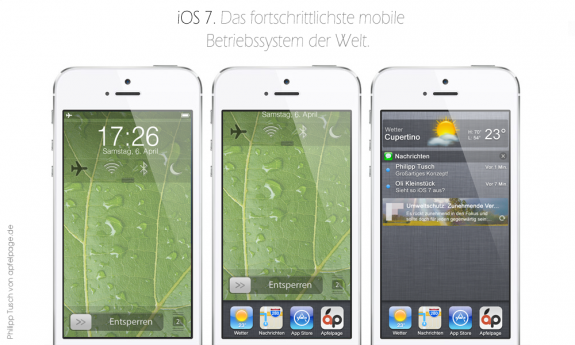 This new iOS 7 concept comes from apfelpage.de. The bulk of the video shows off new iOS 7 lock screen features, but we also get a look at a new Mail App and a beautiful looking weather app for the iPhone.

The new lock screen in iOS 7 would include a number of features that allow users to do more without unlocking the phone. This concept includes toggles for WiFi, Bluetooth, Do Not Disturb and Airplane mode below the clock. We also see multitasking access right from the lock screen, which could offer faster access to the app you used last. The Notification Center also makes a move to the lock screen in this iOS 7 concept, offering access to messages and other items faster. 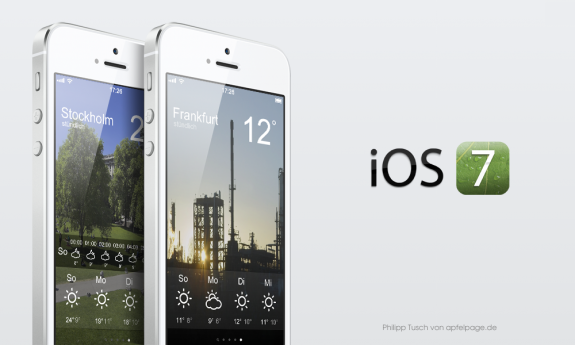 This concept for an iOS 7 weather app looks nicer than iOS 6 and offers faster access to more detailed weather info.

We also see a new Mail app which ditches the blue design for a silver look and slight redesign to the overall setup. We also get a look at a concept for the iOS 7 weather app that is flatter and much nicer looking than the iOS 6 weather app. As a bonus, users can check the detailed forecast without being pushed to Yahoo and prompted to change their search engine.

We expect Apple will announce iOS 7 at the WWDC 2013 keynote on June 10th and could roll it out to developers shortly after. iOS 7 will likely arrive on most recent Apple devices, though the iPhone 3GS is about at the end of its life for updates. The iPad 2 may see a reprieve as it runs the same hardware as the iPad mini.

Expect an iOS 7 release date to arrive for the public later this year, likely in the fall near the next iPhone release. The latest rumors point to an iPhone 5S announcement in September, but this is far from confirmed.