IntelliscreenX for iOS 7 is finally available as Intelliscreen X 7, bringing one of the most anticipated iOS 7 jailbreak tweaks to Cydia after a long wait.

We’ve already shared several of our essential iOS 7 jailbreak tweaks, and now that IntelliscreenX 7 is out we felt it was worth calling attention to this app on its own.

In the two-minute Intelliscreen X for iOS 7 video below we get a look at the major new IntelliscreenX 7 features waiting for jailbreak users that buy and install this iOS 7 jailbreak tweak.

For users that want to see more on the iOS 7 lock screen or in the iOS 7 notification center, this is the iOS 7 jailbreak tweak to install. IntelliscreenX for iOS 7 allows users to put a large amount of information on the lock screen for fast access. This includes,

Users can also use the Messages+ support to quick reply to iMessages or texts without going into the default messaging app. Users that use a passcode on the iPhone can whitelist apps with IntelliscreenX for iOS 7 to allow for more use while the device is still locked. 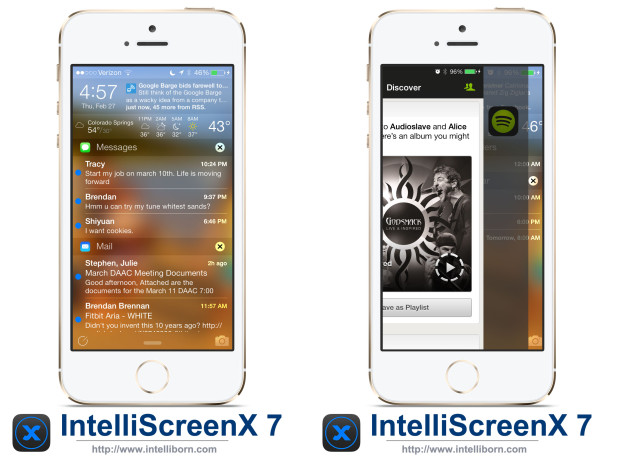 IntelliscreenX for iOS 7 is one of the most anticipated iOS 7 Cydia tweaks.

This iOS 7 jailbreak tweak adds a new multitasking view to iOS 7 that includes live sliding apps that users can access on the lockscreen or on top of other apps. The Slide feature lets users pull apps into view while in other apps to quickly see what’s going on in other apps. Users can see most recent apps and most used apps.

At this point the Intelliscreen for iOS 7 release comes with some issues. There is limited landscape support for some of the new features, like slide, and there is no iPad support. Users may also experience issues while using a passcode and could see some general layout issues as the team works to fix these bugs.

The IntelliscreenX for iOS 7 Cydia tweak is available for $9.99 with a three-day free trial. It’s not clear if there is a $4.99 upgrade option like we saw with previous releases.

The iOS 7 jailbreak is available for iOS 7 devices including the iPhone 5s, iPod touch 5th generation, iPad Air and older devices running iOS 7 up to iOS 7.0.6. Below is a collection of links to our favorite iOS 7 Cydia tweaks and apps.

Here is a list of reasons to Jailbreak iOS 7 and a link to our guide on how to jailbreak iOS 7 with evasi0n. It is important to remember that while iOS 7 cydia tweaks can cost money, the iOS 7 jailbreak is free. Any site that charges for a jailbreak is only offering something users can download free of charge.