The iOS 7 beta offers the ability to make FaceTime Audio calls which are basically phone calls over your data plan that deliver a vastly better sounding call and don’t use any minutes.

While carriers are pushing to roll out HD Voice and VoLTE later in the coming months and into 2014, FaceTime Audio calls are a quick end around to deliver better sounding calls to iPhone users. Because it is built-in to the iPhone, users will not need to ask contacts to install a third-party app, though there is still no way to make a FaceTime call, audio or video,  to a non-Apple product.

The video below shows the procedure for starting a FaceTime Audio call in iOS 7. This is much like making an audio call or a FaceTime video call, and can be added to the favorites section to speed things up.

Another benefit here is the ability to talk and surf the web at the same time on a Verizon iPhone. During a voice call the iPhone 5 will not let Verizon users also surf the web, but because the FaceTime Audio calls are made over a data connection users can also use data to surf and use other apps while on a call. 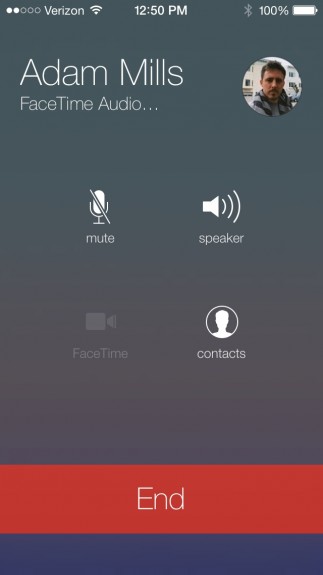 The iOS 7 beta 2 is out now offering developers a chance to try the new iOS 7 features. Users who can’t wait for the iOS 7 release date this fall can join the beta program if they can deal with some issues.

iOS 7 will roll out to the iPhone 5, iPhone 4S, iPhone 4, iPad 2, iPad 3, iPad 4 and iPad mini. Not every feature will be available on each device, but the FaceTime Audio feature will likely arrive on all devices running iOS 7.

Apple just released the first iPad iOS 7 beta, which allows users to try iOS 7 on the iPad and iPad mini, something that may be easier than using the iPhone iOS 7 beta. It’s not a good idea to install the iOS 7 beta on a primary phone or work device because not every feature will work.