The iOS 7 GM download is the final iOS 7 beta which represents a near final version of iOS 7. A Gold Master is the version of iOS that users will download as an OTA update later this month, assuming Apple does not find any major bugs.

Apple posted the iOS 7 GM for iPhone, iPad and iPod touch on the Apple Developer website, but the iOS 7 GM OTA update is not available on the iPhone or iPad at this time.

The Apple iOS 7 GM is 1.2GB for the iPhone 5 and 1.3GB ion size for the iPad when downloaded from Apple’s website.

Update: It appears the iOS 7 GM OTA may not come as users need an iOS 7 GM download and to restore using iTunes. 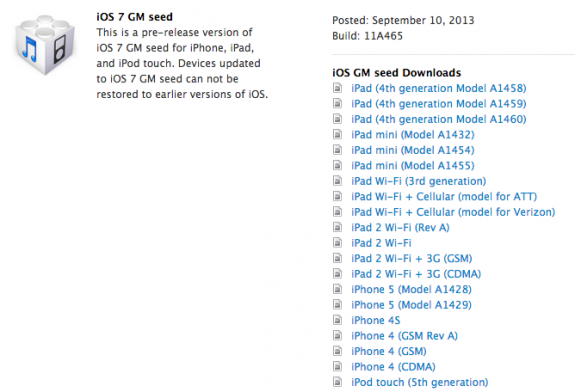 The iOS 7 GM release is here, marking the last beta before the iOS 7 download arrives as a free update to users.

The iOS 7 GM release paves the way for an iOS 7 release to the general public later this month on September 18th. This iOS 7 download is only available to registered developers who joined Apple’s Developer Program for $99 a year. Users who paid $8 or so to take part in the iOS 7 beta program through other services will need to find an alternate iOS 7 GM download link.

Apple posted an iOS 7 release notes document for developers that details what’s new in iOS 7, but the technical document is not likely to be of interest to the average iPhone or iPad user. Apple claims there are 200 new iOS 7 features in this update, and we outline 50 iOS 7 features you’ll care about.

Read: 7 Reasons Not to Update to iOS 7 on Release Day

The iOS 7 download will arrive as a free update on September 18th. Despite rumors there is no delay for the iPad iOS 7 release date, which means users can expect to see the same version on the iPhone and iPad on the same day.

Apple is offering the iOS 7 download for the following devices;

The iPhone 5S and iPhone 5C ship with iOS 7 on board when they arrive on September 20th. Users who buy a new iOS 7 device will get a free copy of iWork and iMovie apps, but this will not come with the update for older devices.

Expect a large number of iOS 7 app updates to hit in the next two weeks as developers deliver new app experiences for users with iOS 7 features.