The first proof of an iOS 7 jailbreak is available, showing a popular jailbreak app running on iOS 7.

Ryan Petrich, an iOS hacker and engineer behind the popular Activator jailbreak app, posted a photo showing an error message preventing his jailbreak app from running because the system is too new. 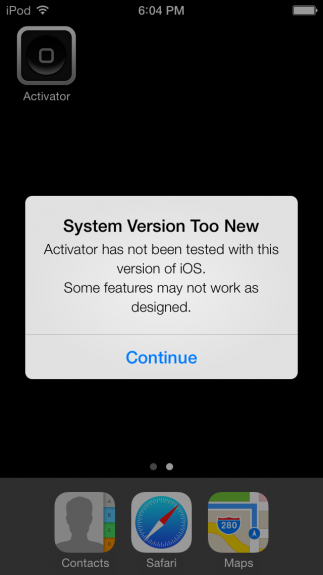 A well known jailbreak community member shows off an iOS 7 jailbreak on the iPod touch.

The photo above appears to show an iPod touch running iOS 7 with a jailbreak. It’s not clear what iPod touch this is, but the screen aspect ratio makes us think it is the iPod touch 4th generation.

In the photo users see three default iOS 7 apps and the new iOS 7 app icons as well as the Activator icon. If this image came from someone outside of the iOS jailbreak community these small items could easily be faked, but given Petrich’s standing in the community this is likely the first real IOS 7 jailbreak photo.

Petrich has yet to add any more commentary or information to his screenshot, and a YouTube account under Petrich’s name does not show any iOS 7 jailbreak video. Without any more info, jailbreak users should not rush into installing the iOS 7 beta to try an iOS 7 jailbreak. At this point we don’t see Cydia running on iOS 7 and there is nothing more to go on in terms of what this iOS 7 jailbreak can or can’t do.

We expect the iOS 7 jailbreak and especially the iPhone 5S jailbreak will take considerable time and effort, even though the Evad3rs reportedly saved some tricks for this new version of iOS. Pod2g, one of the team’s main members is not a fan of iOS 7.

After a few days of iOS 7 beta 1 testing, I must admit that I am about to switch to an Android device.

Apple is in a constant battle with the iOS jailbreak teams and we expect there will be significant roadblocks in the way to prevent an iOS 7 jailbreak from coming right at the iOS 7 release.

iOS 7 is a complete overhaul of the look of the iPhone and iPad, offering a new set of icons and many new features like Control Center and iTunes Radio. The video below shows many of the new iOS 7 features.

The iOS 7 release isn’t here yet, but users who want to try the new iOS 7 features and are OK with losing their jailbreak for a long time can try the iOS 7 beta for as little as $8. There are some drawbacks to this, that should dissuade the average user, but anyone who is ok with jailbreaking should be able to handle the occasional bugginess of the iOS 7 beta and the need to stay up to date.

While it is possible to downgrade from the iOS 7 beta to iOS 6, the downgrade will not let users use an iOS 6 jailbreak tool like evasi0n.