Apple will announce iOS 7 today which will reportedly bring a new look and new features to the iPhone and iPad including easier sharing between devices.

According to one Apple source, all the iOS 7 leaks are wrong, but as the WWDC 2013 keynote approaches, we get another look at what IOS 7 could look like based on a first hand look at an iOS 7 beta.

The iOS 7 mockup below comes from 9to5Mac, where Seth Weintraub claims he was able to get a look at an iOS 7 beta, which features a new look with new style elements, icons and tips on a new iOS 7 feature.

Watch: How to Watch the iOS 7 Announcement Live

In addition to the iOS 7 mockup below, there are reportedly two color schemes for the apps which may point to an iOS 7 feature that changes the icon color based on the amount of light and time of day, a color scheme for white and black iPhones or it could just be internal testing. 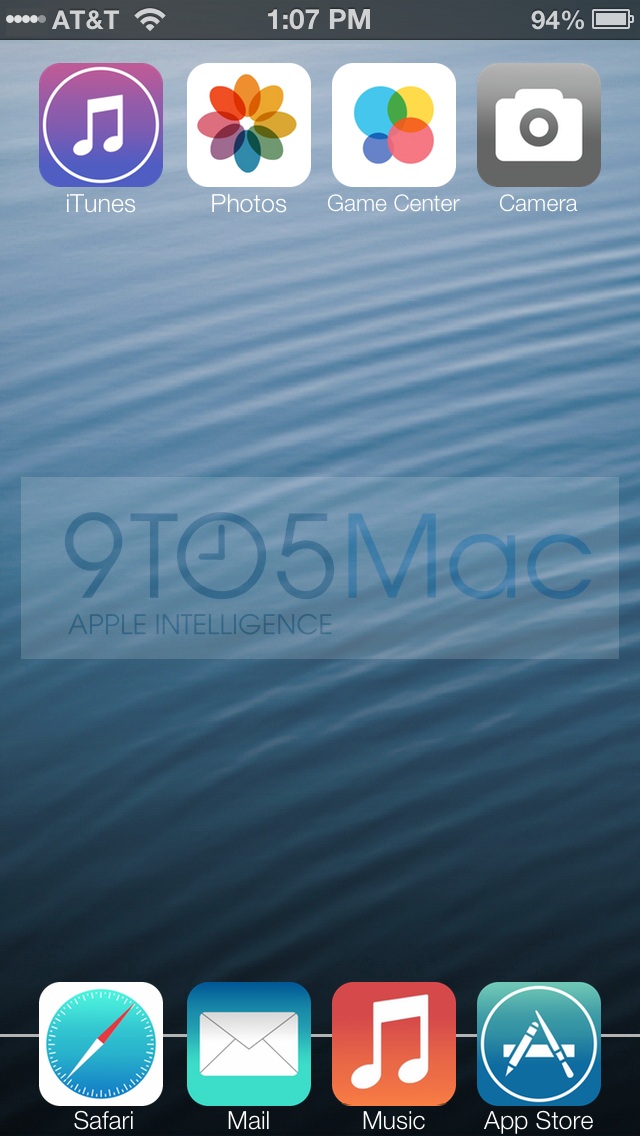 This iOS 7 concept is based on a first hand account of the iOS 7 beta.

This is not an actual iOS 7 screenshot, which Weintraub claims states carries a watermark that could reveal the source. Instead it is an artist’s mockup of how iOS 7 could look when the Apple takes the stage.

The eight iOS 7 app icons above represent what the new Apple apps could look like on the iPhone and iPad with iOS 7. These apps looks similar to the alleged leaked iOS 7 alpha screenshot, but offer a better look at how Apple might adopt flat design.

These are created by Michael Steeber of 9to5Mac, not taken from an actual device, so expect to see some small variations even if the iOS 7 beta is on the money.

If iOS 7 icons change in style, we could see other iPhone and iPad apps change their style to fit a new flat look.

It looks like the iOS 7 home screen will get a facelift as well. There are a few noticeable changes, including the use of dots in the status bar to indicate signal strength. These replace the five bars used on iOS 6.

The mockup also shows a transparent line, which reportedly replaces the glossy dock with a mirror-like finish found on iOS 6. While it’s not mentioned, we could also see a similar change on the lock screen.

Apple will likely announce hundreds of new iOS 7 features on stage, but this morning we are hearing that the iOS 7 beta will include new walking directions and a new share menu that allows users to scroll along the top row to use AirDrop to share with nearby computers and iOS devices.

The new iOS 7 keyboard could come in light and dark themes.

In addition to the two color schemes for the icons, there is a black and a white keyboard in iOS 7, which could switch along with other system elements.

Stay tuned for more on iOS 7 as the WWDC 2013 Keynote approaches.