When Apple takes the stage at WWDC 2013 we expect to see iOS 7, and as we lead up to the event we are getting a better look at how designers think Apple can improve the iOS experience.

We’ve seen many IOS 7 multitasking concept videos, and it’s clear that Apple can deliver a better experience to users in iOS 7.

Previously Auxo led the pack with a beautiful multi-tasking experience that also offers added controls and features. Auxo is already up and running as one of the best Cydia Apps for users who jailbreak iOS 6.

Today we get a new look at an iOS 7 concept, showing us how Apple could re-invent multitasking on iOS. This iOS 7 concept looks similar to the HTC Sense 5 multitasking setup on the HTC One, but we won’t hold that against Ran Avni, who also shared a great looking iPhone 6 concept recently.

In the iOS 7 concept video we get a look at a multitasking setup that focuses on faster access to all the running apps on the iPhone. Instead of four apps at a time, multitasking takes over the entire screen in iOS 7, showing users up to 9 apps with a preview of the page that is open in that app. This makes it easier to remember which app you are switching too. Users can scroll down to see more open apps. 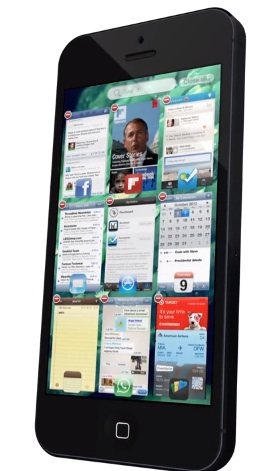 It’s not an issue that this iOS 7 concept covers the full screen as there is no way to use the screen while in the multitasking menu of iOS 6.

There are small “X” marks on each open app by default, making it possible to quickly close a single app without the need to tap and hold. In this concept there is also a close all button that closes every open app on the iPhone, essentially wiping the slate clean.

Apple will take the stage on June 10th at WWDC 2013 to announce new software and address developers. While Apple is not officially talking about iOS 7, it is extremely likely that Apple will announce iOS 7 at this event. Jony Ive is reportedly behind a major system overhaul in the user experience. The new iOS 7 look may offer a flatter appearance without the gloss and real-world looks for many apps. Apple reportedly pulled OS X engineers off projects to help finish up iOS 7 on time for a WWDC 2013 reveal.

If Apple announces iOS 7 on June 10th an iOS 7 beta should arrive for developers soon after, offering a way to test new iOS 7 features ahead of a public release which could take place in the fall shortly before an iPhone 5S release date.