iOS 7 Release Time: When to Expect the iOS 7 Download

The iOS 7 release time is not official yet, but thanks to Apple’s predictable schedule, we have a good idea of when you can expect the iOS 7 download and update option on the iPhone, iPad and iPod touch.

Users who want to avoid any issues shouldn’t try to get iOS 7 as soon as Apple starts the downloads, but for users who can’t wait to try out the new iOS 7 features, here’s when you can expect a release. 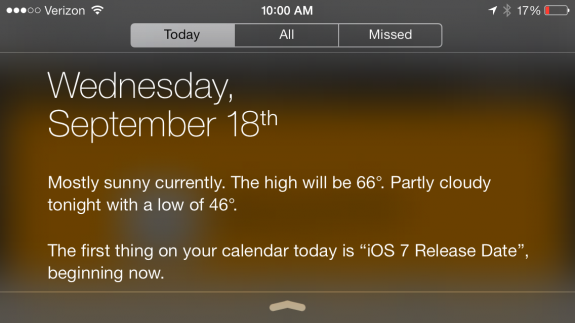 This time makes sense for Apple who is based in California, as it allows the company to prepare for a release that won’t ping most iPhone or iPad users in the middle of a commute and it lets Apple’s support staff get in and ready for any issues.

Here is the iOS 7 release time for your time zone.

While Apple is predictable with iOS release times, one reason the company may avoid announcing a specific iOS 7 release time is to prevent server overloads. While Apple was able to handle the demand for iOS 6 last year, the company may not want the equivalent of digital lines, which would likely outpace the iPhone 5s lines already forming across the U.S. and abroad.

The iOS 7 download is free for the iPhone 4 and newer, iPad 2 and newer and iPod touch. Users can upgrade to iOS 7 directly from the iPhone or iPad without the need to plug into a computer.

The video below highlights many of the new iOS 7 features and offers a glimpse at the new iOS 7 design which Craig Federighi, Apple’s SVP of Software Engineering called, “the most significant iOS update since the original iPhone.”