The iOS 7 release is finally here and it’s anything but a smooth ride for 16GB iPhone and iPad owners who need to clear out space for the iOS 7 update to download and install.

Compounding this problem is the general iOS 7 Software Update Failed error that many users are getting while attempting to be among the first to download the iOS 7 update.

Several members of the Gotta Be Mobile team own 16GB iPhone 5s and 16GB iPads, are not able to download and install iOS 7 on these devices without deleting photos, videos or apps to make room. 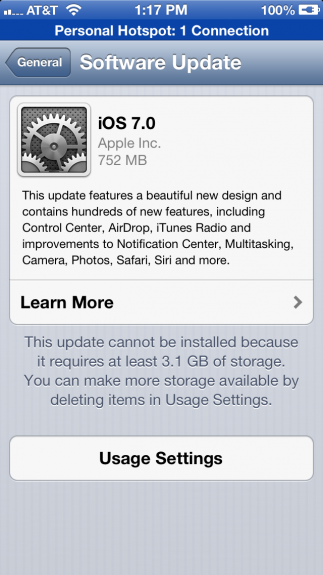 The iOS 7 update error for not enough storage.

After it is installed users will not lose this 3.1GB of space to the iOS 7 update, it is only needed for the installation process. The iOS 7 download is roughly 750MB in size.

This isn’t an issue for most users on a 32GB or 64GB iPhone or iPad as there is typically more room for the installation file. 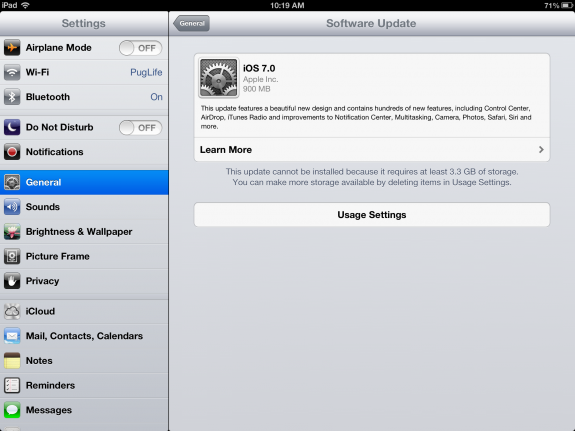 When users with not very much storage space attempt to download and install iOS 7, they will see a small error message that tells them there is not enough storage space.

The easiest way to get around this error is to try the iOS 7 update on your computer with iTunes. In previous years using iTunes to update allowed users to get on the latest version of IOS without un-installing apps or deleting media.

Check out our how to install iOS 7 guide and skip to the iTunes part to give this a shot. 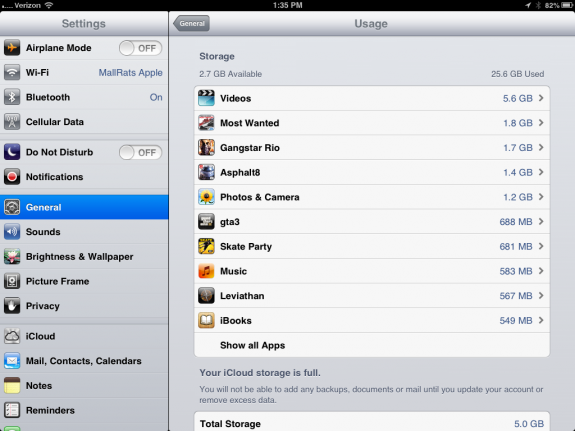 Free up storage on the Pad or iPhone for iOS 7.

While doing this keep in mind you will need at least 50% battery life to perform the upgrade, so plug in to stay charge up. This is another reason why the free 8GB iPhone 4s that arrives later this week could prove troublesome down the road.