The new iOS 8 beta 4 delivers a more stable experience for testers and adds a dedicated iOS 8 tips app to help users do more with iOS 8.

The iOS 8 beta 4 arrived on July 21st with a collection of performance enhancements, the new iOS 8 tips app and a new look for control center.

Apple announced iOS 8 in June, with a public iOS 8 release date scheduled for this fall. Apple is progressing through a number of iOS 8 betas to let developers test their apps ahead of the official release. The iOS 8 beta also lets Apple experiment with new designs and features on a broader audience. 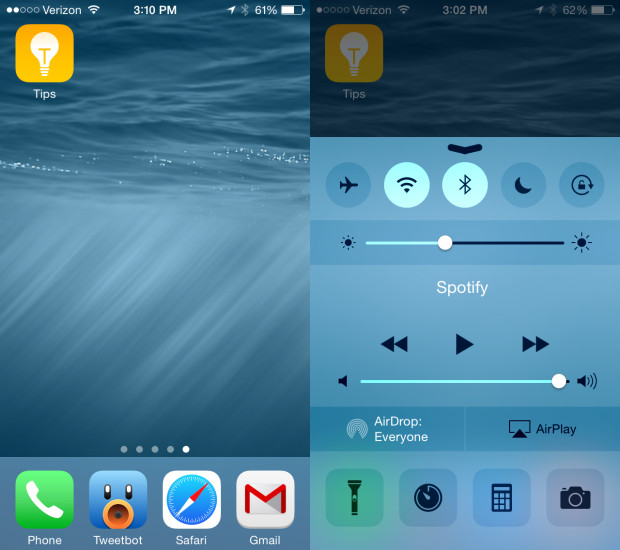 Although the iOS 8 beta is designed for developers, anyone with $8 can try the iOS 8 beta right now. Although this means using unfinished software we typically see a smooth experience on beta 4 or beta 5, so it may finally be time for a few more regular users to jump in and see what iOS 8 features Apple plans for 2014. This is also how you can see the new iOS 8 Control Center look on your own.

Here’s a closer look at the new iOS 8 Tips app that Apple includes in the iOS 8 beta for iPhone and iPad. This app, or one like it, will likely arrive on the iPhone 6 and as part of the iOS 8 update this fall for the iPhone 4s, iPhone 5, iPhone 5s and iPhone 5c as well as most iPads and the iPod touch 5th generation. 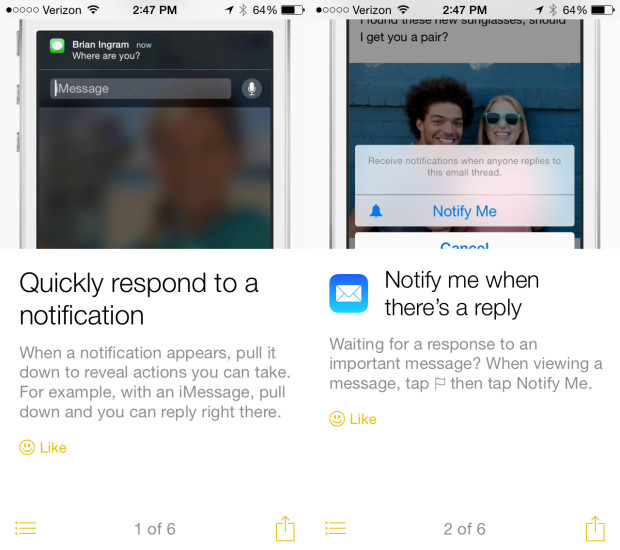 The iOS 8 Tips app walks users through six iOS 8 tips right now, with more to come each week. A tips or guide app was a common feature on Android phones in the past, and one that Motorola added to the notifications of recent Android devices. If users find and use the iOS 8 Tips app they will gain fast access to how to use new iOS 8 features.

Included in the iOS 8 tips app on iOS 8 beta 4 are the following tips, which apply to new iOS 8 features.

These are just a few of the iOS 8 tips we can expect from Apple as this feature grows. Assuming Apple keeps the iOS 8 Tips app in the public version of iOS 8 this could help many users learn how to do more with the new version of iOS. The iOS 8 tips app is built-in and a free app like other stock iPhone apps.

Expect to see several more iOS 8 betas before a public iOS 8 release date this fall. For a closer look at what to expect check out the iOS 8 vs iOS 7 changes iPhone owners need to know and 51 Cool iOS 8 features.

The new iPhone 6 will run iOS 8 when it arrives this fall, and it may include a number of exclusive iOS 8 features. The video below shows how the iPhone 6 compares to the iPhone 5.