There is no iOS 8 Camera Roll, leading to users thinking the iOS 8 update deleted thousands of their photos. Your photos are safe, just in a new place.

Even though Apple did not delete your photos, there is no Camera Roll in iOS 8. This means you need to look in a new place to find your photos and if you look through your old photos in the Facebook app you can’t find them to share without a painful process.

The Camera Roll was where Apple kept all the photos you ever took with the iPhone, but the iOS 8 Camera Roll is now called Recently Added and it only contains the last 30 days of photos.

There is a new version of the iOS 8 Camera Roll that offers access to all of your photos, but you’ll need to change where you look and you won’t find this while you are trying to upload photos in the Facebook App, the Dropbox app and other apps that normally show the Camera Roll.

First off, your photos are safe. The iOS 8 Camera Roll equivalent is in the Photos App, on the Photos Tab and it’s called Collections. 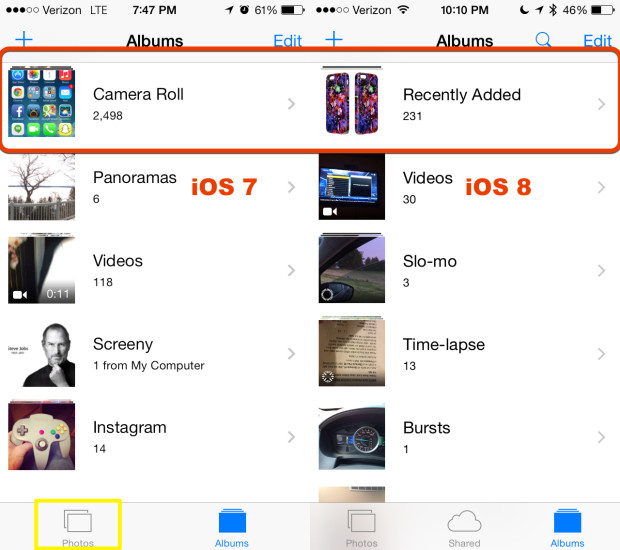 There is no iOS 8 Camera Roll, but Apple didn’t delete your photos.

In Collections on iOS 8 you will see the all of your photos organized by date and location. You can scroll through these photos like you used to do in the Camera Roll but now you can search by location, date and other attributes to find the photos you want.

Users complain on the Apple Support forums about the problem and on Twitter.

Someone please do article on The Great Camera Roll Loss of iOS 8. Not being able to see just the pictures your actual device took is awful.

We discovered this problem when trying to upload photos from a year ago while in the Facebook App. The app shows a Camera Roll, but it is only the Recently Added items stretching back 30 days. There is an option to choose other albums, but there is no way to select Collections from inside the Facebook and Dropbox apps.

The only way around this is to find the photos you want in Collections and share directly to Facebook. If you need to upload to Dropbox or use an app that is not listed as a share option on iOS 8 you’ll need to find the photos, tap on Select, tap on your photos and then on Add to, and add them to an album. 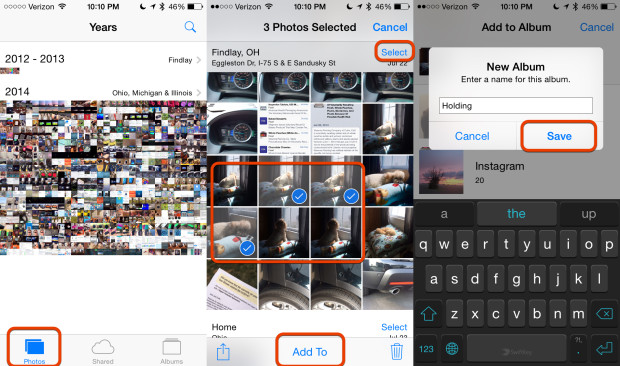 If you need to do this a lot it’s worth creating a new album specifically for uploading to Facebook, Dropbox and other apps.

You can’t add these photos to Recently added, but you can add them to another album that is accessible in Facebook and Dropbox. Finding other albums in Dropbox is easy, but you may not see the option in Facebook. While using Facebook tab on the Camera Roll at the top and then on the album you want to pick from.

This is not an ideal solution, but until developers change to support the new way the iOS 8 Camera Roll works this is the only way you can get these photos where you want them. We’re waiting to find out if developers can use Collections or if this is a permanent problem.