In a month we will see what Apple has in store for iOS 8, but a new iOS 8 concept shows a gesture and motion sensing update that could deliver a better iPhone experience and could help make an iPhone 6 with a larger screen easier to use with one hand.

iOS 8 is the name for Apple’s next version of the popular iOS software for the iPhone, iPad and iPod touch. The company plans to announce the future of iOS at WWDC 204 on June 2nd in San Francisco, which is where we expect to see the first look at iOS 8.

A new version of iOS 8 may include gestures and smart actions that allow users to easily unlock and turn an iPhone 6 on without hunting for a power button. The HTC One M8 is a very tall phone, but users don’t need to touch the power button to turn it on because it combines motion and gestures to turn the display on, open up to certain apps and to access a voice assistant.

A new iOS 8 concept from Jiang Hongming shows a more intelligent iOS 8 that could make using an iPhone 6 with a larger screen easier to do with one hand. Hongming describes his Smart Gesture version of iOS 8 as more efficient for the user, better for the home button which can wear out after extended use and better for battery life because it can intelligently turn the display off.

The video above shows off some of these features that could make an iPhone 6 running iOS 8 easier to use. Below are five potential iOS 8 features from this concept that would deliver a more intelligent version of iOS thanks to the M7 motion chip in the iPhone 5s. Apple is reportedly planning an Apple A8 processor for the iPhone 6, that will very likely include an updated version of this chip that can track motion.

When you take the iPhone 6 out of your pocket iOS 8 will realize this using sensors in the phone and automatically turn the display on. Many Android phones can detect when they are in a pocket and the Moto X can wake up when you remove the phone from your pocket and show a lock screen with notifications. It would make sense to show the iOS 8 lock screen when you pull an iPhone 5s or iPhone 6 out of your pocket so that you could see the time and use the other features in this concept.

When you place the iPhone down on a table or a desk, the screen stays on for a certain amount of time. Instead of a user pressing the power button, this iOS 8 concept recognizes that the phone is now sitting and not in use and turns the display off.

This iOS 8 concept includes a few interesting auto open options for the camera, photos and to auto play a video. In the video these are not well defined as to what would trigger each, but at the very least it would be great to see Apple offer a fast access to camera option that allows a user to lift the iPhone 6 to landscape mode and press a volume button to open the camera app, even if the screen is off.

The iOS 7 lock screen is not that useful. It can show missed notifications and allow you to swipe to go to that notification, but many times users are opening the iPhone to go to a specific app. This iOS 8 concept uses something we see on the HTC One M8 right now to swipe to open an app. 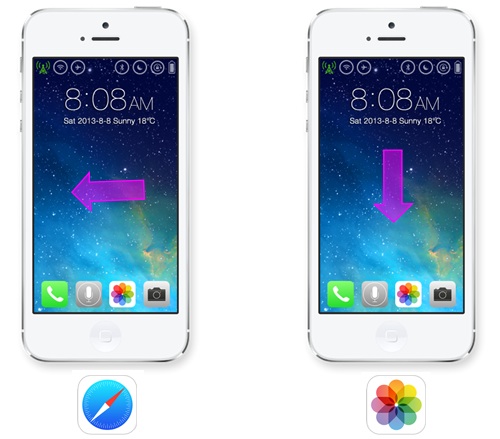 A swipe to the left opens Safari, a swipe down opens Photos and there are other gestures to open settings, clock, calculator and more. This small addition could make the iOS 8 lock screen much more useful.

Users that want to try iOS 8 can register their device to be a part of the iOS 8 beta for as low as $8 ahead of WWDC 2014. We expect to see the iOS 8 announcement on June 2nd with a list of many new features and changes, but a similar look to iOS 7.

The iPhone 6 release is rumored for the fall, near the time of a public iOS 8 release. The 4.7-inch iPhone 6 may arrive in September according to rumors, but the larger 5.5-inch iPhone 6 might not make it until the holiday shopping season.