After every iOS 8 update the problem dissipates, and in some cases disappears completely, but only for a short time. Two iPhone 6 review units we own improved after iOS 8.1 and again after iOS 8.1.1 and iOS 8.1.2, but while we wait for the iOS 8.1.3 release the problem returned with a vengeance. It is currently so bad that one of the iPhone 6 models is switching to landscape mode at the wrong time at least 20 times a day. 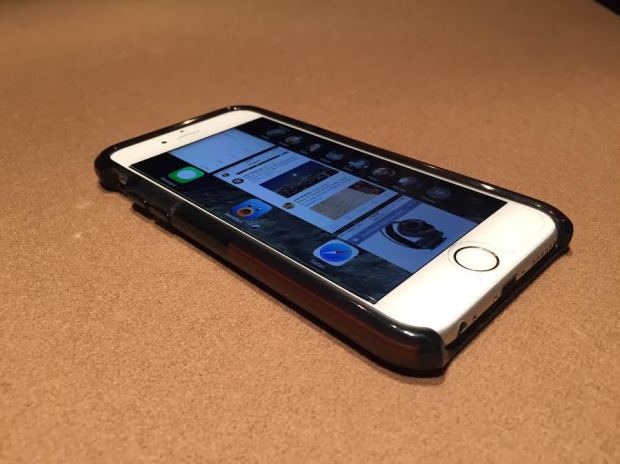 The iOS 8 landscape problems may present a bigger challenge for Apple to fix because it is sporadic and is not a problem on every iPhone. The iOS 8 landscape bug is a bigger problem in Messages, Hangouts and other messaging apps, but it also happens in Safari, the iOS 8 camera app and in Alien Blue during our tests. Recently the camera problem increased to the point where many photos and videos are recorded in the wrong orientation. Fixing a photo is simple, but rotating a video is incredibly annoying.

A still active thread in the Apple Support forum indicates that we are not alone in our frustration with the iOS 8 landscape bug that Apple cannot identify and fix.

My phone has been getting stuck in landscape a lot since I updated to iOS 8 and its annoying as hell.

Reddit user teknique37 writes, “I’m on an iPhone 6, and this happens much too frequently. MUCH TOO FREQUENTLY,” and ProtoJMan adds a complaint about the iPhone 5s, “This happens to me constantly, on a 5s. Figured I wouldn’t be alone, but I also figured it would have been fixed last update.”

Sometimes the iPhone 6 Plus is stuck in landscape mode on iOS 8.0.2.

In our testing, the iOS 8 landscape bug is definitely a problem for some devices but not others. We own an iPhone 6 and iPhone 6 Plus with most of the same apps and similar usage, but only the iPhone 6 is a problem. Of the other iPhones running iOS 8 at Gotta Be Mobile only one other iPhone 6 shows these landscape problems.

There is no permanent fix for iOS 8 landscape problems. The only way we are able to avoid this frustrating experience is to lock the iPhone in portrait orientation until we need to watch a video. Swipe up from the bottom edge of the screen and then tap the lock icon to keep the iPhone in the current orientation that you see.

Apple is reportedly planning an iOS 8.1.3 release date soon, but if this does not fix the problem users will need to look to the iOS 8.2 update for help. The iOS 8.2 release is likely in March around the rumored Apple Watch release date. Although this update will focus on making the iPhone work with the Apple Watch, we expect that it will also include a variety of bug fixes and other updates to combat a number of iOS 8 problems.

With an iOS 9 release still months and months out, and no formal announcement, users are hopeful that Apple can fix this nagging iOS 8 problem with one of the smaller updates that should arrive in early 2015.