Apple could use the iOS 8 update to make iPhone and iPad users more aware of the company’s free music streaming service iTunes Radio by putting the app front and center.

iTunes Radio is currently part of the Music app in iOS 7.1, sitting as a tab below next to playlists at the bottom of the stock music app. As part of the Music app, users must first find a reason to go into the stock music app, to discover iTunes Radio exists. In conversations with iPhone owners there are still a number of users who don’t know about the service because they use Spotify, Pandora or another music app instead of keeping music locally on the iPhone or iPad. 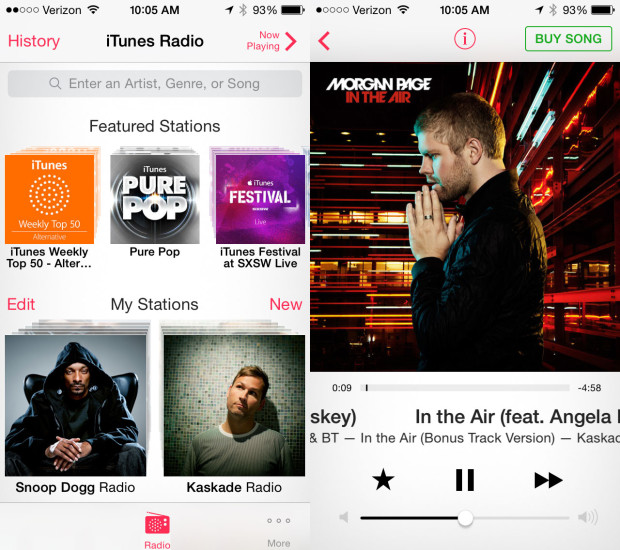 The iOS 8 update could bring an iTunes Radio app that exists outside of the stock Music App.

Mark Gurman at 9to5Mac continues to share details about iOS 8, the next major update to Apple’s mobile operating system. In a new report this morning he shares that Apple is contemplating making iTunes Radio its own app. This comes a day after Gurman reported that Apple is planning to dramatically improve Apple Maps with transit directions and more data as well as plans for a dedicated health tracking app in iOS 8.

iTunes Radio is clearly focused on radio, which competes with the free version of Spotify, but the service does not let users access a large catalog of music for a subscription fee like Spotify. Apple uses iTunes Radio as a tool to sell advertising and to sell songs to users. The iOS 7.1 update makes it easier for users to buy a song they hear on iTunes Radio. With iOS 7.1 Apple also made it easier to create new stations using search from the iTunes Radio page.

So far most of the iOS 8 rumors focus on improvements and updates to apps, which highlights a problem with Apple’s app strategy for core apps. Apps like Maps, Music and Mail are part of the core OS, which means users must wait for iOS updates to see new features.

Google moved away from this strategy over the past year, which allows it to push out updates to apps as they are ready, delivering new features to apps throughout the year on Android devices. Google needed to do this to combat the lag of updates arriving on older devices, but the strategy is paying off with new features coming to Google Apps quickly.

It would be nice to see Apple move these apps to a status like iPhoto, GarageBand and the Podcasts apps which see various updates throughout the year, instead of only timed to iOS updates.