The iOS 8 update is exciting, and a little frightening for iPad 3 owners. Although not as old as the iPad 2, this device is not as powerful as the iPad Air which means a small performance hit.

Installing iOS 8 on the iPad 3 brings a collection of new features, but you won’t find continuity on the iPad 3 — which means no answering phone calls, sending texts or switching between apps with ease.

After installing iOS 8 on the iPad 3, performance took a small hit. The iPad 3 is still usable, but it feels slightly slower. Some lag disappeared after running apps for the first time, but overall the device feels more like it did on iOS 7 than on iOS 7.1 — slower.

The iOS 8 video below highlights some of the new iOS 8 features that you can expect, but on an older device like this not all the upgrades make it to the user.

Here’s a look at the iOS 8 on iPad 3 performance. This is our first impression after a day with iOS 8 on the iPad 3 and only a few hours of use. I normally use the iPad Air, but I also occasionally swap over to the iPad 3 so that i know how it handles from one update to the next.

It took a while to install iOS 8 on the iPad 3, mainly because I chose to install it as soon as Apple released the update on September 17th. After a lengthy download, two to three hours, the iOS 8 installation completed with no trouble.

Some users ran into iOS 8 installation problems where the update stopped halfway, requiring users restore to factory settings and restore from a backup. It’s a good idea to make sure you have a current backup.

I was able to install iOS 8 over the air without deleting any files or apps, but it needs a lot of space so you’ll want to remove files you don’t need or install by plugging in to iTunes. 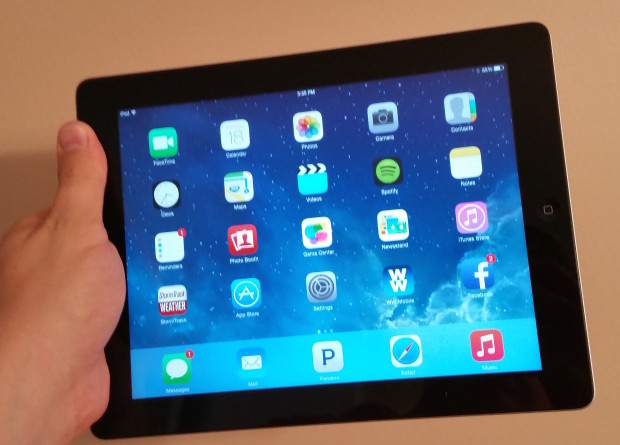 What you need to know about the iOS 8 iPad 3 performance.

After installing a major update like iOS 8 I check a variety of key areas to make sure the device is still usable. In this case it better be, since my wife is the main user of the iPad 3 in our house.

In addition to looking at the iOS 8 speed, I want to make sure battery life is good, Applications work correctly and there are no random crashes or connectivity issues with WiFi or Bluetooth.

Here is how the iOS 8 iPad 3 update performs after several hours of use.

I have not run into any apps that will not work on the iPad 3 with iOS 8 installed. From the stock apps like Safari and Messages to Pandora and other streaming apps I have not experienced any crashes in my limited time with iOS 8 on the iPad 3.

It is much to early to tell if the iOS 8 battery life on the iPad 3 brings a major change, but even after the power consumed installing iOS 8 and doing all of my testing I have 67% battery life left with a day of standby time and several hours of actual usage.

Small and large updates can break WiFi on the iPad. I went through a lot of trouble with WiFi on the iPad 3 while using the iOS 6, but it is working well and Bluetooth is also up and running. This is a WiFi only iPad 3 so I can’t test cellular connectivity. 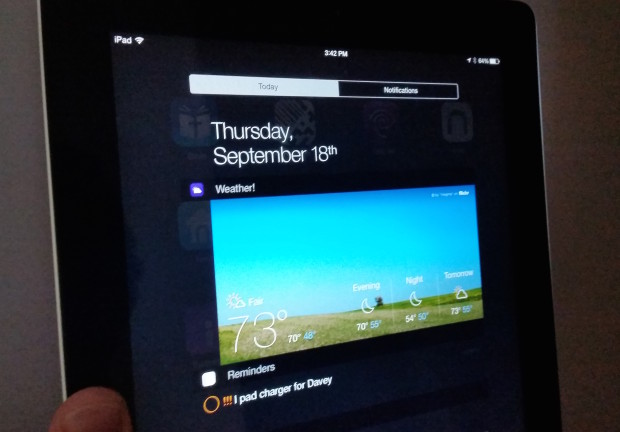 iOS 8 widgets are new, and a nice addition to the iPad 3.

After using the iPad 3 with iOS 8 installed for several hours I did not experience any odd bugs or issues. Most of the noticeable changes are added features and overall speed.

It may be that some issues appear with extended use, but this is a good sign for now.

Speed is one area where the iOS 8 iPad 3 update falters. The iPad 3 is an older device and it simply doesn’t run iOS 8 as well as the iPad Air. The iOS 7.1 update delivered a speed boost to the iPad 3 that was very much appreciated. With iOS 8 the iPad 3 feels sluggish like it did on iOS 7.

When starting Safari for the first time after the update it took a little longer to load, but that improved slightly. I also experienced keyboard lag, but after an app loads completely that disappears as well.

Overall the entire experience of using the iPad 3 feels a little bit slower. I can still use this device, but I’m already looking forward to updates.

The iOS 8 iPad 3 update does not deliver connectivity to the iPhone, like newer iPads do, and there is no AirDrop to the Mac either, but Apple still adds several features that I enjoy using on the iPad 3. 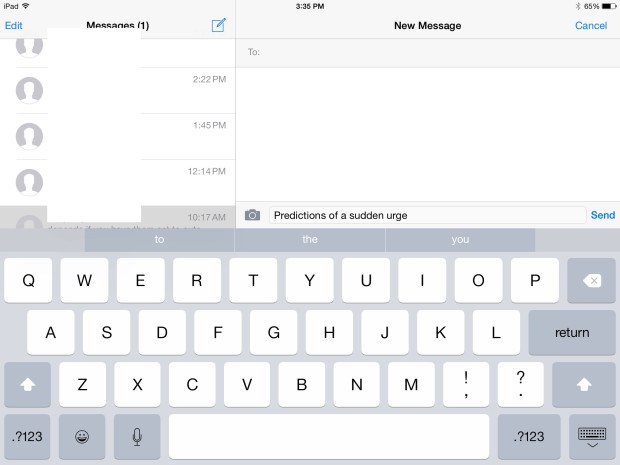 A predictive keyboard is one iOS 8 iPad 3 feature I enjoy.

For more, check out our iOS 8 vs iOS 7 slideshow that walks through many of the new iOS 8 features.

Should I Install iOS 8 on the iPad 3?

After spending a day with iOS 8 on the iPad 3, most users should wait before installing this update. If you can’t delay the update because you really want the new iOS 8 features listed above you won’t hate the iPad after installing, but you’ll experience a slowdown.

We’ll share an iOS 8 iPad 3 review soon, after we spend more time with the device to see if the slow performance is due to updates and growing pains, or if they are a perm fixture.