Earlier this month, Apple confirmed a number of new products for arrival including a new Apple Watch, two new iPhones in the iPhone 6 and iPhone 6 Plus, and the iOS 8 update for iPhone, iPad and iPod touch. iOS 8 was originally confirmed at WWDC 2014 though at the time, Apple declined to get into specifics about its release date. At the iPhone 6 launch, Apple revealed a September 19th iOS 8 release date and today, the company made good on its promise.

This is much bigger than past iOS updates and it’s a cause for concern for those without iTunes and for those with limited amount of storage on their iPhone or iPad. These issues likely are going to be a problem for iPhone and iPad users touting larger storage models. However, those with 16GB iPhones or iPads will likely need to free up a ton of space to push the iOS 8 installation process ahead.

The iOS 8 update for the iPhone 5 requires 4.6GB of space though the amount of storage needed for the iPad Air iOS 8 update is far more drastic. Those looking to install iOS 8 on the iPad Air Over-the-Air need 6.9GB of free space in order to install iOS 8 on board their tablet. That’s almost half the amount of internal storage on board the 16GB iPad Air. 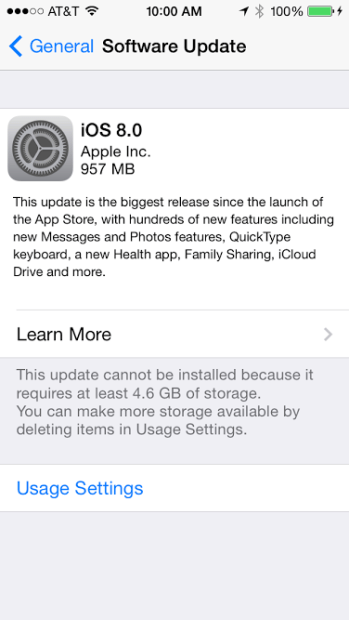 Before deleting precious photos, apps and other files, iPhone and iPad users running into iOS 8 storage problems will want to consider installing the iOS 8 update with iTunes. iTunes does not require any free space to install though the process is far more inconvenient.

Those that cannot use iTunes will need to go to Settings -> General -> Usage to see which apps or videos are taking up the most space on the iPhone or iPad. This will allow you to delete the biggest apps for a faster iOS 8 upgrade, instead of hunting and deleting apps, music, and other files on the iPhone, iPad or iPod touch.

It appears that iPad and iPhone users are running into other iOS 8 problems as well. iTunes is delivering server errors to those trying to install the iOS 8 update through that method and those trying to check for the update manually through the update’s settings are getting server errors as well. Errors in the minutes after an iOS release are common and they tend to dissipate in the hours after the initial release.

Check for the iOS 8 update in iTunes.