With the influx of smartwatches and health and fitness gear on the market or rumored to enter the market in the near future, it looks like Apple may be looking at a better way for users to integrate, track, and monitor collected health data from these smart wearables. In addition to separate apps–like those developed by Fitbit, Jawbone, Martian, and others, Apple may be considering an integrated health wallet called Healthbook that may make managing and monitoring biometric data from various accessories more easy to understand.

According to a report on the New York Times, Apple executives had met with officials from the U.S. Food and Drug Administration over a month ago that could usher in a new software product that may allow the company to stay ahead in the emerging wearable computing market. The meeting, which occurred on December 13 according to the FDA’s public calendar, could pave the way for Healthbook.

Healthbook is said to be debuting with a new version of the iOS operating system called iOS 8 and could store fitness information according to 9 to 5 Mac.

Apple is already experimenting with fitness monitoring as part of its iPhone 5s release with a dedicated M7 Motion Coprocessor that always tracks and records steps taken and serves as a pedometer on that smartphone. According to Apple, the M7 coprocessor allows the smartphone to maintain stellar battery life while doing this data collection. Potentially, additional health and fitness information could be collected with Apple’s rumored wearable smartwatch called the iWatch, and Healthbook could allow the company to not just provide stats to users, but do so in a meaningful way so that they can find relevant correlation between fitness levels and healthiness.

Likely, Apple will also allow third-party developers and makers of accessories to tap into Healthbook to provide rich data in which the iPhone will become the central hub. 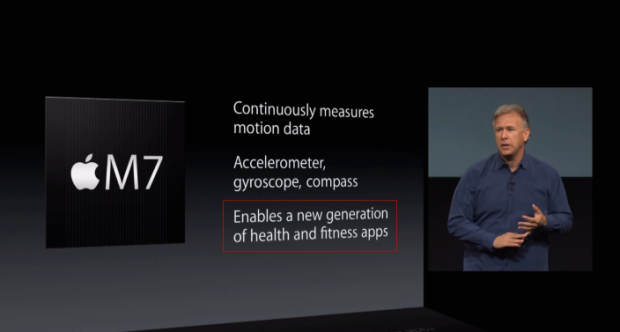 “The application will be able to track a person’s blood pressure, hydration levels, heart rate, and potentially several other blood-related data points, such as glucose levels, according to our sources,” 9 to 5 Mac reported. “The software is also programmed to allow users to enter details about their medications so that they could be reminded to take pills at scheduled times. This will likely integrate with iOS’s existing Reminders application.”

Though the iPhone 5s is not able to track biometric data–other than pedometer information–it is rumored that more health tracking will be built into the iWatch and Healthbook will allow users to interact with the iWatch in monitoring health information.

The design for Healthbook is described to be similar to the cards interface introduced with Passbook, which allows iOS users to manage loyalty cards, gift cards, coupons, travel boarding passes, and tickets to events.