As expected, the iOS 9 release time was 10AM PT and the iOS 9 update and its features are now available to download for all iPhone, iPad and iPod touch models capable of running the iOS 8 update. The list includes the iPad 2, iPhone 4s and iPhone 5.

Apple didn’t announce the iOS 9 release time but the update arrived on schedule. The iPhone 6 iOS 9 update is 1GB in size, much smaller than previous iOS updates though many iPhone 6 owners, and owners of other iPhone and iPad models are unable to install the update right now. 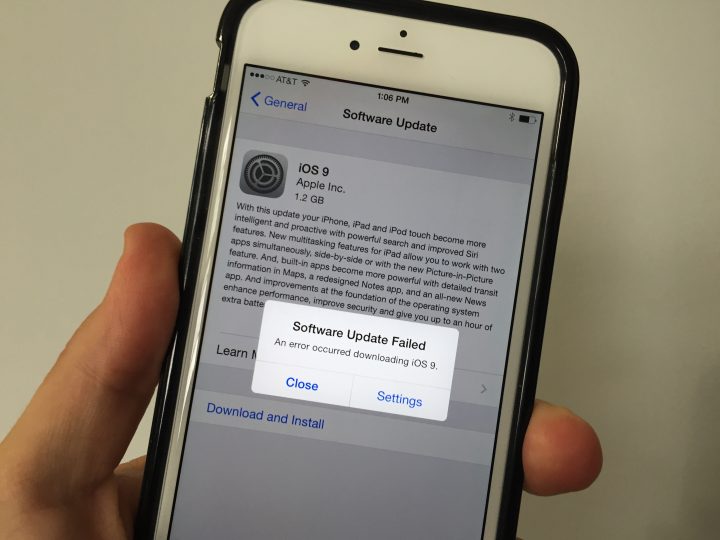 The iOS 9 download is plagued with an “iOS 9 Software Update Failed” problem that seems to be plaguing more than a few iOS users. When we tried to update to iOS 9 on several devices, a prompt appeared telling us that “an error occurred downloading iOS 9.”

For the moment we, and many others, are unable to download the iOS 9 update Over-the-Air through Settings. Other users are reporting similar issues.

Installing through iTunes appears to work for some people though we’ve been able to establish a connection through the application in the minutes since launch. If you are greeted with the iOS 9 Software Update Failed error, and you’re able to get to a computer with iTunes, you’ll want to give it a shot. You can also use an iOS 9 direct download to manually install iOS 9.

Apple’s servers typically get hammered with requests right at the iOS 9 release time. So while there isn’t a known fix for the iOS 9 OTA download issues at this time, things will likely settle down as the day progresses. Download times typically improved in the late afternoon and early evening.