The folks over at MIC Gadget have received a new leather case, which is said to accommodate Apple’s second-generation iPad, which is still unannounced and unreleased though often rumored. Though the screen resolution of the next iPad revision is still being disputed by various Internet pundits, the screen size is said to be the same–about a 9.7-inch display. The iPad 2’s purported leather case design fits the screen size, though the case is said to be built for a slimmer iPad model with a flat back versus the curved back of the current Apple slate.

Another feature noted in the MIC Gadget article include a cutout for the camera on the rear of the device, corroborating speculations that the next-generation iPad will have both front- and rear-facing cameras for FaceTime video chat, Skype video calls, and other instant messenger applications that may support video interfaces.

120,000 pieces of the case have thus far been shipped from China to the United States where a “famous case company ordered all these cases,” according to MIC Gadget.

The case can be folded onto itself and propped up to stand like a monitor or display, which would give the iPad a monitor-like appearance for viewing videos, displaying slides or photos, or for tasks and productivity, especially when paired with a Bluetooth keyboard. 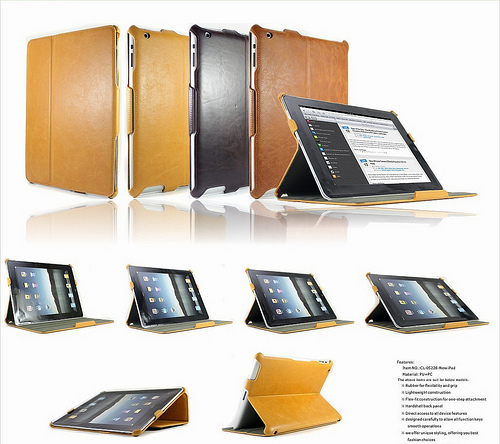 Another feature is that the iPad 2 leather case has a larger cutout, which is believed to house a larger speaker. Given that sound technology has been a highlight of mobile devices, ranging from laptops to smartphones, it seems like a natural evolution for the iPad to focus on the multimedia experience, especially since the slate is geared at content consumption, including Internet videos from popular sites like YouTube. In fact, Apple rival HP is delivering the webOS TouchPad with Beats audio and various manufacturers are integrating better audio capabilities by partnering with companies like Dolby, SRS, and others.