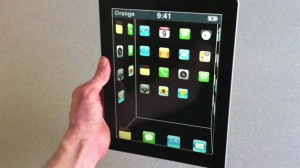 With 3D becoming en-vogue on mobile devices like the Sprint HTC EVO 3D and the LG G-Slate, the iPad 2 is not one to be left out of the 3D craze despite being released without the 3D-capable display from Apple. That little fact isn’t stopping researchers at the Engineering Human-Computer Interaction Research group as the team is utilizing the available hardware capabilities of Apple’s second-generation tablet to bring 3D to the iPad 2.

Rather than utilizing a screen like the G-Slate, which requires glasses, or the glasses-free 3D display of the EVO 3D, researchers are using the front-facing camera on the tablet to track a user’s eyes and head movement. Coupled with software on the tablet, which uses an algorithm to adjust how things are shown on the screen, you get a displayed image that really looks 3D.

The best part about this latest effort to bringing 3D technology to the iPad 2 is that no special screens, screen overlays, or glasses are required, which may help keep the costs down for future 3D on a mobile device. All that’s required is a special set of algorithm coupled with the hardware requirement of a front-facing camera for head tracking.