iPad 2 rumored to have thinner bezel, flatter back, and larger speaker 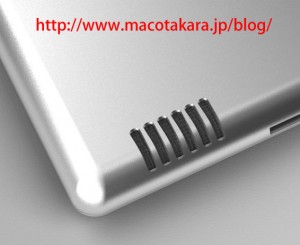 Citing an anonymous Chinese source, Japanese blog Mac Otakara is sharing supposed details of the next iPad along with a rendering based on that info. Among the details is that the large cutout seen in previous case mockups is, as I expected, for a larger speaker. Horses not zebras.

The rendering, credited to Taiyo Fujii, is similar (but far superior in terms of Photoshopping) to what is shown in a rendering of another case offered on alibaba.com. The new iPad is believed to offer the same screen size but with a narrower bezel and flatter back, though the case designs indicate the edges will still be rounded. The light sensor is said to be relocated to the rear panel, though the case designs so far do not support that.

More interestingly, they are uncertain about the addition of cameras to the iPad, calling the information “unreliable” though I take that to mean their source would not claim it was a done deal. Apple’s FaceTime push strongly implies a front camera is a lock, but I could see them wavering on a rear camera. However, I doubt they’d bother with a rear-mounted light sensor if there wasn’t a camera back there. Again though, it’s all rumor until we see it in Steve Jobs’ hands.

Via Engadget and Apple Insider