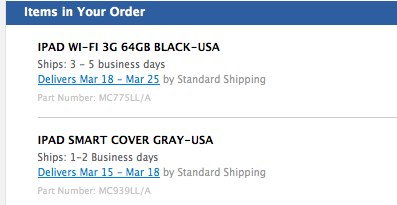 As Xavier reported you can now order an iPad 2 online from Apple.com. I got up early this morning and placed an order. And, as reported there are no expedited shipping options. My order is listed as scheduled to ship in 3-5 days, with the cover and the HDMI accessory scheduled to ship sooner.

Reports later this morning (it’s about 4 hours or so after I ordered) now say that shipping is being listed as 5-7 days, which leads some credence to those who thought the lack of a pre-order option pointed to constrained supply.

Of course, if you want to play the game you can head to the multiple locations to pick one up. I was at my local Wal-Mart last night about 9pm and there was one gentleman already standing in line. He was in a bit of a discussion with a Wal-Mart employee about where he could hang out when I walked by.

UPDATE: According to Apple Insider the estimated shipping date is now 2 to 3 weeks. Intriguingly, my order for a SmartCase has already shipped.