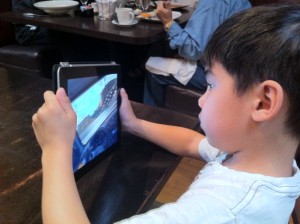 My nephew is all of five years old and like a lot of kids his age, he can use an iPad without any assistance. His dad owns an iPhone 4 and so he is used to iOS and apps, but it still amazes me that kids his age are right at home with the iPad.

Yesterday my wife and I had the pleasure of seeing several friends and family. At lunchtime I showed my nephew the iPad 2 and he immediately lit up. I’d downloaded a racing game ahead of time and after selecting a car for him, I handed the iPad 2 over. He played for a good 20 minutes without asking for any help at all.

The iPad 2’s touch interface and accelerometer mean there are no complex controls, allowing him to have fun without technology getting in the way. The smile on his face when he ‘wins’ the race says it all.

He asked to play Angry Birds for a while when we got home. After watching him play for a few minutes I showed him GarageBand. He really liked banging away at the drums and strumming the guitars. But he liked hearing his own voice even more. I showed him how to record tracks (took about 30 seconds) and left him a lone for about 20 minutes. He returned to the living room a couple of times to ask how to make a new song. Other than that, he had no help at all and of course he had no manual at all.

The results of his unnamed song are above. He figured out how to create new tracks and use Smart Drums on his own. While this recording’s not quite ready for distribution, it’s incredible that someone of his age can grasp the concept of multi-track music production within a few minutes. He made up ‘lyrics’ that fit within the 8-bars of beats he’d created with Smart Drums. He recorded a brief guitar solo and a second drum track for a solo of sorts. Not bad for  a first try and it makes me wonder what he could do with practice and encouragement.

My nephew’s a bright kid, but he’s hardly unique. Hand any kid an iPad and they’ll figure it out pretty quickly. It’s not just for games as some people think – kids really connect with the iPad 2 and it can definitely be used as a learning tool.

Some iPad 2 critics will laugh at the above experience and probably point out that Apple designs its gadgets for ‘noobs,’ but that’s a good thing in my book. If every consumer tech company designed gadgets that could be easily used by little guys like my nephew our digital lives would be much more enjoyable.

Next time my nephew comes over I’m going to show him iMovie on the iPad 2 and see what he comes up with.

You can read our detailed iPad 2 Review here.