iPad 2 Stays on as Cheap Option, iPad 4 Killed Off

The new iPad 5, which Apple is calling the iPad Air is now official with a thinner design, more power and long 10-hour battery life. It’s also weighs just a pound.

Apple is killing off the iPad 4 which is just a year old, which allows Apple to offer this new iPad Air at $499 for a 16GB model. Apple is keeping the iPad 2 around, even though it doesn’t come with a Retina Display or a Lightning connection.

Apple is also upgrading the iPad mini 2 to a Retina Display, which makes the iPad 2 stand out as a larger and much slower version, but Apple claims users want a cheaper full size iPad and apparently the iPad 4 would be too close to the iPad 5, aka iPad Air. 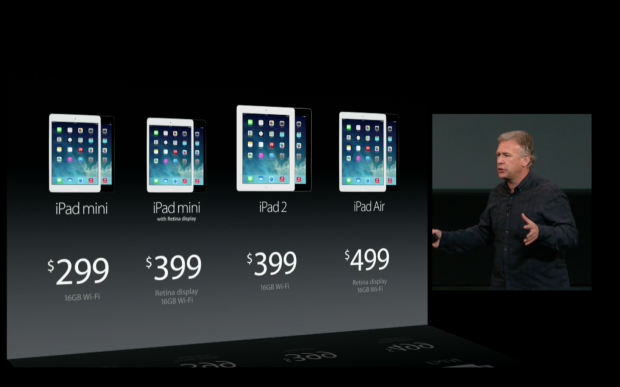 The iPad 4 is no longer available from Apple, but the iPad 2 lives on.

This allows Apple to keep pricing in line with the current models, which worked well even against the competition who are offering cheaper tablets running Windows and Android.

The iPad 2 and the iPad mini are the only remaining Apple products without a Retina Display, and with a price jump fro the iPad mini 2, it looks a lot like Apple is unable to drop prices on iPads with Retina Displays. This may change in the future, but we expect to see this pricing stick for the iPad lineup for the rest of the year.

iPad 4 deals will likely arrive as retailers look to clear stock and Apple offers up refurbished iPad 4 models to shoppers. We expect to see a collection of iPad 4 deals and iPad 2 deals on Black Friday and through the holiday season as doorbusters.

The iPad 4 is no longer on Apple’s website, but the iPad 2 is still available even as the iPad Air takes over the top spot.