We are not surprised to see that someone has taken the iPad 2, even with a less that stellar camera, and shot an entire music video using nothing but the iPad 2. The group is called Eddy and their song is Need which you can download for free at the band’s site.

To get the video, they shot using four iPad 2’s and some other professional camera gear to hold the tablets. To get that many, they stood in line for eight hours on launch day. It took them five hours to shoot the video and another 12 to edit. There is no indication that they used the new iMovie app. As you can see from the video the scenes are little dark, something the film crew, Remedy Films, mentioned.

We probably shouldn’t have filmed in a dark setting, but it actually worked well in a “party” environment, plus it fit the song perfectly!

As the folks at MacStories observed, it will be pretty cool to learn of a song composed and performed on GarageBand, shot with the iPad 2, and edited entirely in iMovie. 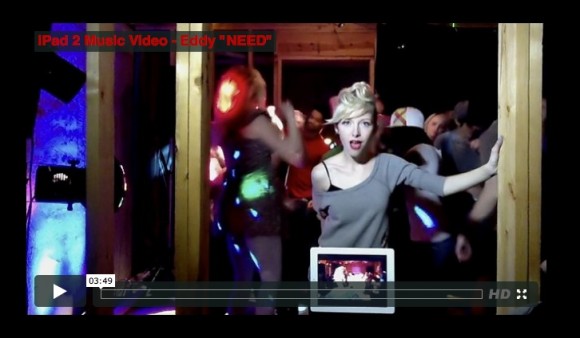