The iPad 2 was announced just a few hours ago, but there’s already a number of interesting videos making the rounds. Here’s the best iPad 2 videos we’ve found so far, both from Apple and from those lucky enough to attend the iPad 2 launch event in San Francisco.

The first iPad 2 video you’ll want to watch is from Apple’s YouTube channel. In this video, Apple execs go over the highlights of the iPad 2, explain how it was made and what it’s capable of. They do touch on the iPad 2’s specifications and features, but most of the video is focused on the iPad 2’s usability. Of course you need to remember that this is essentially an iPad 2 commercial, so there’s a bit of hyperbole involved. John Ive and Michael Tchao do most of the talking. Apple does a lot of ‘showing’ in this video and it’s packed with info, touching on most everything Steve Jobs mentioned as he introduced the iPad 2.

The iPad 2 can be protected with the new iPad Smart Cover. The Smart Cover’s receiving very positive feedback from those who’ve seen it in action and this video shows you how versitile it is. The Smart Cover is available in 10 colors.

CNet posted this video, which is the highest quality video I’ve seen thus far. Cnet is a division of CBS Interactive, which has sufficient budget to send full-fledged video production crews to important tech events. Cnet’s equipment rivals broadcasters’ equipment and you can see the results above. In this video overview, CNet gives us a quick tour of the iPad 2 and you’ll get a good idea of what both the white and black iPad 2 models look like.

The iPad 2 is much faster than the original iPad. But GHz don’t mean much to most of us. Engadget was kind enough to post a video demonstrating how fast the iPad 2 is. In fact, Engadget calls the iPad blazing fast. The iPad 2 benefits from the speed bump everywhere from simple iBook page turns to complex photo and video calculations. You’ll see both in the above iPad 2 demo.

In this video you’ll see a demonstration of iMovie on the iPad 2. iMovie has been around for over 10 years, but it used to require an OSX computer. Last year iMovie came to the iPhone, but it was a stripped down version. iMovie for the iPad 2 can do a lot more thanks to the faster processor and it’s easier to control thanks to the bigger screen.

Garage Band is another app that is borrowed from iLife for Macs. Users will now be able to record and mix music on the go on the iPad 2. Garage Band for iPad 2 is compatible with the OSX version, which means you can start your project on the iPad 2 and finish on your MacBook.

Steve Jobs fans will appreciate this video, which shows how he introduced the iPad 2 at the San Francisco launch event. Again, there’s a heavy dose of salesmanship in this Apple-coordinated presentation, but it does give you a sense of the device from one of the guys responsible for bringing it to market.

Our friend Mark Spoonauer from LaptopMag posted the above video, which gives a nice walkthrough of the UI and Facetime. 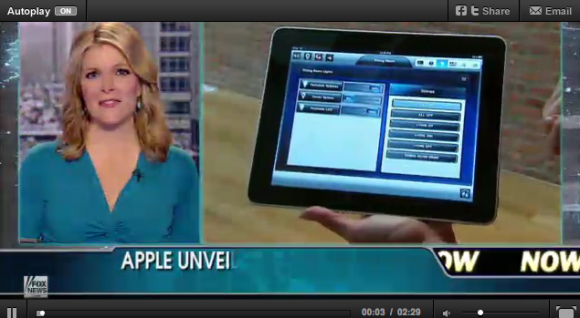 The mainstream media is busy producing newscasts about the iPad 2. This Fox news clip gives a good, quick overview of the day’s activities. It also describes how excited tech writers were to see Steve Jobs on stage. Many people didn’t expect Steve Jobs to show up for the launch of the iPad 2 since he’s taking a break from daily responsibilities due to health concerns. (Click the Image or here to view video).

Larry Magid and an Apple rep have another hands-on look at the iPad 2 and the iPad Smart Cover. Magid especially likes the GarageBand and iMove apps.

Of course stock analysts and investors are following the iPad 2 closely. The WSJ analyzes what Steve Job’s appearance at the iPad 2 event means.

The Wall Street Journal’s Walt Mossberg says that Apple’s done enough to keep the competition at bay, but Apple won’t enjoy a 90% market share like it did in 2010. He also talks about the iPad 2 as a content creation device. 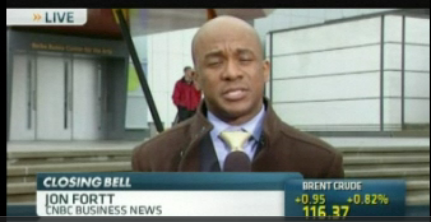 As you can see, the financial community seems almost more excited about Steve Jobs being well enough to appear on stage than the iPad itself. (Go to Bing to View). The CNBC reporter makes a good point about the iPad 2 being a threat to PC sales, though he fails to mentiont hat you need a desktop or laptop to synch the iPad 2.