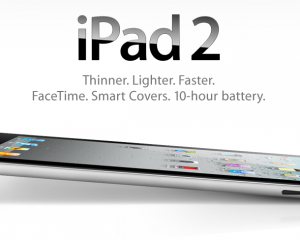 The iPad 2 has a faster processor and some other internal upgrades. But most people who will buy an iPad 2 or any other tablet in 2011 simply don’t care about specs. The user experience is far more important than GHz and GB and it’s silly to focus too much on specs when comparing tablet platforms.

Let’s consider the four predominant tablets of 2011, at least those that have been announced thus far. The Apple iPad 2, Motorola Xoom, HP TouchPad and RIM BlackBerry PlayBook are the most talked about tablets in 2011 thus far. I already own the original iPad and Motorola Xoom and have played with the BlackBerry PlayBook quite a bit. The HP TouchPad is the only one out of the lot that I haven’t had a chance to use yet. They are all good devices, but what differentiates them are their unique user experiences. Not specs.

Engadget put together a nice table that compares each of these tablets, which I’ve pasted below. Right up top on line one is the most important ‘spec’ of them all, the OS. Those interested in an Android 3.0 experience aren’t going to shift their attention from a Xoom to the iPad 2 because it has more storage. If benchmarks prove that the iPad 2 is faster than the PlayBook, corporate types aren’t going to scuttle their plans to buy truckloads of the BlackBerry-compatible Playbook tablet.

Those who point to one spec (except the OS) or another as to why one of the above tablets is better than the other are missing the challenges of the tablet wars completely.

The other key component in the battle over tablet market share is price. As of today, Apple offers something nobody else does – a tablet that costs $499. The Motorola Xoom is $599 with a two-year contract or $799 without. Some Android fanboys argue that $599 is actually a better deal than the iPad since the Xoom comes with 32GB of storage capacity by default, while the iPad only comes with 16GB. But if you look at the total cost of ownership, the iPad is still the price leader.

One of the most important components of the iPad’s price, even with the 3G option, is that the iPad 2 can be an impulse buy. You can be in and out of an Apple store in minutes. You can even pick up an iPad 2 with 3G and activate 3G whenever you’d like. With the Motorola Xoom you need to sign up for an expensive two-year contract and wait while Verizon runs a credit check. There will be a WiFi-only version of the PlayBook and Xoom down the road, but retailers will have much less incentive to sell it compared to a device that requires a profitable two-year contract.

Over 15 million people are using the original iPad models. I’m willing to bet that far fewer than a million of them can rattle off more than a couple of lines from the iPad’s spec sheet.