The iPad 3, or iPad HD hasn’t even been announced, but we are starting to see several iPad 3 cases pop up online from popular case makers and third-party retailers.

While many case makers are holding off, after getting burned by the lack of an iPhone 5, we tracked down several listings for iPad 3 cases thanks to ITProPortal.

In addition to the cases you see below, we’ve heard from a reliable source that one large case maker is ready to deliver new iPad cases as soon as the iPad 3 release date arrives. Some of the cases below have settled on the iPad 3 name, but companies are sitting on iPad 2S and iPad HD stickers to slap on new iPad cases in the event that Apple picks a different name.

When we shared a hands on video of the iPad 3 parts, we reported that thousands of iPad 3 cases had already been shipped to the U.S. and are already appearing in the Shenzhen marketplace, but these case listings are available online, for your perusal. 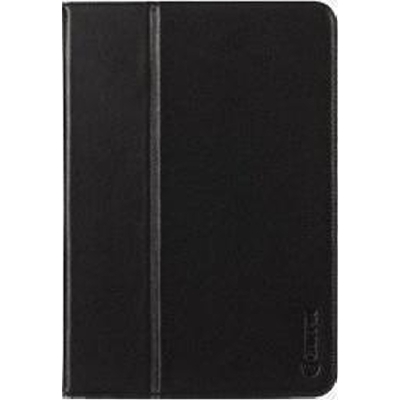 The Griffin Outfit iPad 3 Smoke case is the only iPad 3 case listing with an image, but unfortunately it doesn’t offer much of a look at what to expect at Wednesday’s iPad event. Shown above, the Outfit iPad 3 case is described as,

“Sleek, stylish, hard-shell protection for your iPad in a smooth matte finish. This super-slim shell snaps on and stays put, surrounding your iPad in durable polycarbonate to protect it against dings and dents. With all this protection, you still have total access to your iPad: Multi-Touch display, audio jack, dock connector and all”

Apple Insider reports that Best Buy has received a large shipment of iPad 3 cases, which are not to be opened until after the iPad 3 release date. Included in this batch of iPad 3 cases is the new Targus Versavu 360, which may be joined shortly by InvisibleShield protection for the iPad 3.

Belkin also let slip a screen protector for the iPad 3, which can be seen with a stock iPad image in this cached page.

The rest of the iPad 3 case listings posted by ITProPortal are landing pages without photos, but include the following names and information.

The iPad 3, or iPad HD as it might be called, is the center of an Apple event on March 7th. We expect a slightly different looking iPad form factor with a new Retina Display, faster processor and a better camera. The iPad 3 may be the first iPad with 4G LTE connectivity, but that is far from confirmed.