While we still don’t have the entire iPad 3 puzzle put together yet, we have had some pieces fall into place over the last couple of weeks that suggest Apple is gearing up to release something special in the weeks ahead. Today, we have another leak courtesy of RepairLabs who have received a picture of what appears to be the back shell of an iPad 3. The shell, if real, reveals a couple of possible tidbits about the iPad 3’s features. 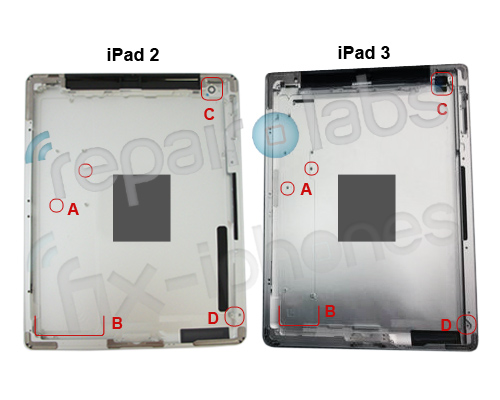 That may not be the case.

Speaking of the display, the iPad 3 shell points to changes in the way the LCD display is mounted onto the casing. Now, this doesn’t suggest anything about the quality of the display of course but it does seem to signal some design changes made by Apple.

Whether or not it’s because of a new Retina Display remains to be seen.

Other notable differences include a narrower logic board which will not only allow for a different LCD display but also for a larger battery. We’ve heard that the iPad 3 might have better battery life then the 10 hours currently offered by the iPad 2 and this seems to point to that as being a distinct possibility.

In addition, the report claims that the rear camera could also be different because of how it mounts to the iPad 3 casing. The iPad 2’s camera was far from stellar and the sensor found in the iPhone 4S is one of the best around so maybe Apple will upgrade it in the iPad 3.

Apple will reportedly both announce and release the iPad 3 in March and it’s rumored to have a Retina Display, quad-core A6 processor, and 4G LTE capabilities on board when it does in fact arrive.